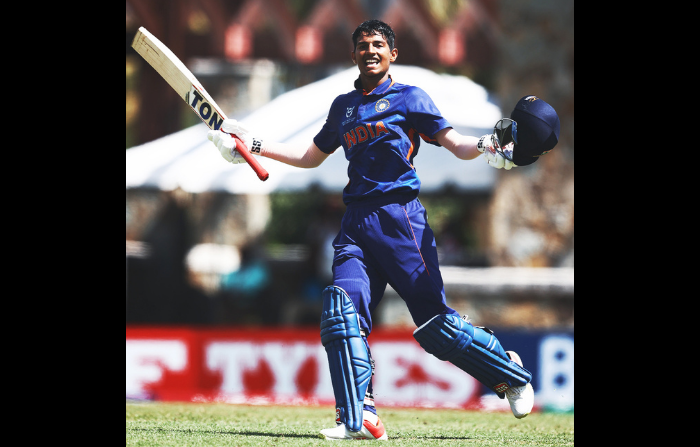 India U-19 captain Yash Dhull celebrates his century against Australia in the second semi-final of ICC U-19 Men’s Cricket World Cup 2022 at Coolidge Cricket Ground in Antigua and Barbuda on February 2, 2022. (ANI Photo)

INDIA captain Yash Dhull and No.3 batter Shaik Rasheed produced a superb batting display in the second semi-final of the U-19 World Cup against Australia at the Coolidge Cricket Ground in Antigua and Barbuda on Wednesday (2) to help their side beat the former champions by 96 runs to storm into their record eighth final of the marquee event.

After winning the toss and electing to bat, Dhull slammed 110 in as many balls while Rasheed made 94 off 108 deliveries to add 204 runs for the third wicket after India lost their openers on 37. The four-time champions put up a total of 290 for 5, thanks to plundering of 27 runs off the 50th over from Australia spearhead Tom Whitney. Jack Nisbet and William Salzmann got two wickets each.

Australia lost their in-form opener Teague Wyllie cheaply and never looked in command in the chase. Lachlan Shaw made 51 and there were a couple of 30s and eventually Australia were bowled out for 194 inside 42 overs.

Dhull, whose batting had nailed Australia in the warm-up game ahead of the tournament, was adjudged the player of their match.

India will now play England in the final at Sir Vivian Richards Stadium in Antigua and Barbuda on Saturday (5). The Boys in Blue will be looking for a record fifth title since winning their first title in 2000.

Australia, on the other hand, will lock horns with Afghanistan, who closely lost the first semi-final against England, on Friday (4) for the third-fourth play-off.