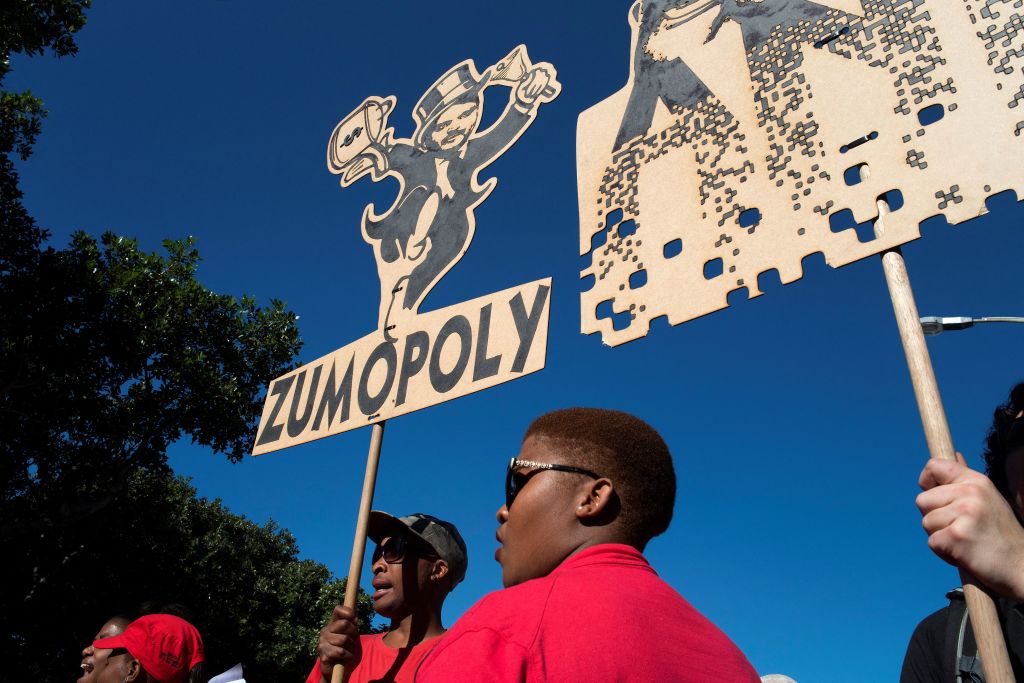 People carry a placard with a parody of one of the Gupta brothers during a demonstration march organised by a broad-based coalition called #UniteBehind, to place pressure on MPs to vote for the removal of South African President Jacob Zuma (not visible) before a no-confidence vote by parliament, on August 7, 2017 in Cape Town. – A coalition, including members of most of South Africa’s political opposition parties, churches, unions, and other civic organisations marched on August 7 calling for the removal of president Jacob Zuma. Zuma faces increasing opposition, even within his own party, the ruling African National Congress (ANC), about his connection to the Gupta family of businessmen, and South Africa’s downgrading by financial rating agencies. (Photo by RODGER BOSCH / AFP) (Photo by RODGER BOSCH/AFP via Getty Images)

RAYMOND Zondo, the chief justice of South Africa who is leading the State Capture Commission which is looking into the alleged corruption in times of former president Jacob Zuma, has found that the latter breached the Executive Ethics Code at the time of his involvement in the formation of ANN7, a television news channel owned by the Gupta family which is under the scanner, South Africa’s Independent Online reported.

In the final instalment of the probe commission’s report, Zondo said the former president knew that he was breaking the law since he was the acting president when the ethics code was set up in the late 1990s, the news website said.

“The Executive Ethics Code was published by the then Acting President J G Zuma… and the members of the Cabinet, Deputy Ministers and Members of Provincial Executive Councils are obliged to comply therewith in performing their official duties… There can be no doubt that in acting as he did, in relation to the TNA (breakfast) and the ANN7 TV station, President Zuma acted in breach of the Executive Code of Ethics. He, as President, abused his office for his own benefit, that of his son and that of his friends, the Guptas. He placed himself in a situation of a conflict of interest and abused his position as President of the country,” the report read.

He also targeted Hlaudi Motsoeneng, the former acting chief executive of SABC, saying he was equally guilty of allowing the Guptas to remove taxpayers’ funds from the public broadcaster.

“Former Minister Muthambi handed the reign over SABC editorials to Mr Motsoeneng, as it was put, and allowed him to act above the law… It is recommended that the law enforcement agencies conduct further investigations with a view to a possible criminal prosecution of Ms Lulama Makhobo, former Group Chief Executive Officer of SABC and Mr Hlaudi Motsoeneng for possible contravention of the Public Finance Management Act,” Zondo was quoted as saying by Online.