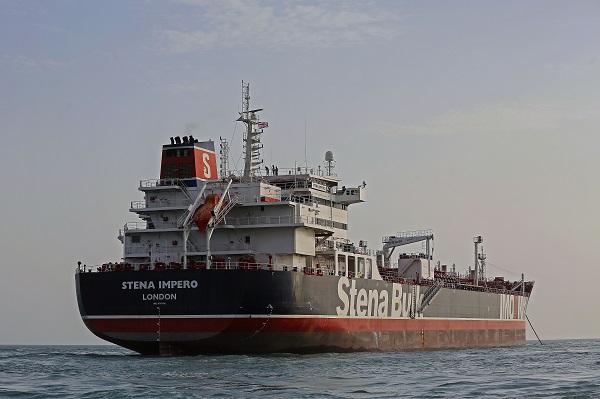 Family members are being updated on the latest developments and the company will continue to provide updates as the situation develops, the statement said (Photo: HASAN SHIRVANI/AFP/Getty Images).

THE crew of a British-flagged oil tanker, including 18 from India, that was seized in the Gulf are “safe”, the vessel’s Swedish owner said on Wednesday (24) after speaking to them for the first time.

The Stena Impero and its crew were taken by Iran’s Revolutionary Guard five days ago in the Strait of Hormuz.

The owner, Stena Bulk, made contact on Tuesday with the ship’s master who said they were safe and there was good co-operation with the Iranians on board.

The vessel has a crew of 23- 18 Indians, three Russians, a Latvian and a Filipino.

“Stena Bulk can confirm that we have had direct communication with the crew of the Stena Impero since late yesterday,” the company said in a statement.

“The Master advised that everyone was safe with good cooperation with the Iranian personnel on board,” it said.

Family members are being updated on the latest developments and the company will continue to provide updates as the situation develops, the statement said.

Erik Hanell, President and CEO, Stena Bulk said: “We do of course appreciate this step of development and that this is a first sign that we will soon see more positive progress from the Iranian authorities.”

The vessel seizure came amid heightened tensions between Iran and the UK.

Iran said it had detained the Stena Impero on July 19 because it collided with a fishing boat, but Stena Bulk has said it has received no evidence of a collision.

The BBC, quoting a spokesman for Stena Bulk said the next step would be to try and get somebody on board to check on the crew, but there was no timeline for when they might be repatriated.

A report from Iran’s semi-official Tasnim news agency says the UK has sent a mediator to the country to discuss the freeing of the tanker.

On Monday (22), British Foreign Secretary Jeremy Hunt called on Iran to release the tanker and its crew, describing its seizure as “state piracy”.

On Wednesday, Iranian president Hassan Rouhani suggested that Tehran might release the British-flagged tanker if the UK takes similar steps to release an Iranian oil tanker seized by the British Royal Navy off Gibraltar earlier this month.

“We do not seek the continuation of tension with some European countries,” Rouhani said in comments carried on his website.

“Should they be committed to international frameworks and give up their wrong actions, including what they did in Gibraltar, they will receive a proportional response from Iran,” AFP news agency reported from Tehran.

Meanwhile, T V Pappachan, father of Dijo Pappachan, one of the crew from Kerala, told Khaleej Times that his son was in touch with the family even the day before the impounding of the tanker.

“He called and spoke with his mother on the morning of July 18, saying he is on his way to Saudi Arabia from Dubai. To our utter shock, we got a call from his company the next day saying the ship is under Iran’s custody.”

The father from Kalamassery, Kochi, said he is praying for the safe return of his son and the entire crew.

“I have complete trust in the government of India and our diplomatic strength,” he said.
The Ministry of External Affairs said their mission is in touch with the government of Iran “to secure the early release and repatriation of Indian nationals”.

Tensions between the UK and Iran deteriorated earlier this month when Royal Marines seized an Iranian tanker near Gibraltar which was suspected of breaking EU sanctions. The ship has five Indian crew.

In response to the incident, Iran threatened to seize a British oil tanker.

Relations between Iran and the US have also deteriorated, after the White House tightened sanctions on Tehran following its withdrawal from the 2015 nuclear deal.