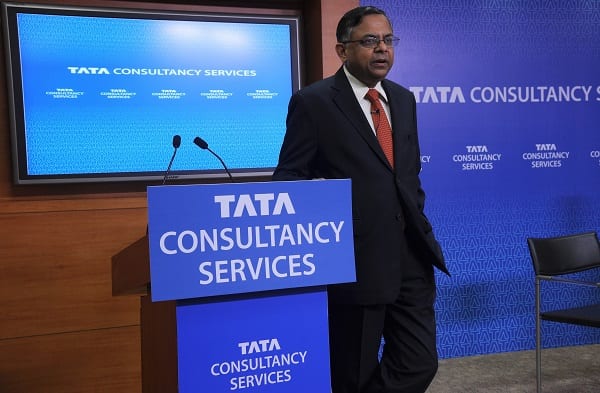 The downbeat figures come as India’s economy endures a prolonged slowdown with the software giant’s revenues seen as an indicator of the health of the country’s IT export sector (Photo: INDRANIL MUKHERJEE/AFP/Getty Images).

The Mumbai-headquartered firm posted a 1.8 per cent rise in consolidated net profit to Rs 80.41 billion for the quarter ended September, up from Rs 79.01bn a year earlier, the company said.

The downbeat figures come as India’s economy endures a prolonged slowdown with the software giant’s revenues seen as an indicator of the health of the country’s IT export sector.

“We ended the quarter with steady growth despite increased volatility in the financial services and retail verticals,” TCS chief executive Rajesh Gopinathan said in a statement.

“We remain confident as the medium and longer term demand for our services continues to be very strong, as evidenced by our Q2 order book the highest in the last six quarters.”

Known as India’s second-most valuable company, TCS was at the forefront of an IT boom that saw the country become a back office to the world as firms largely in developed nations subcontracted work, taking advantage of a skilled English-speaking workforce.

TCS earns more than 80 per cent of its revenues from Western markets including Britain, the US and Europe.

The September-ended quarter is generally considered a strong one for India’s IT service exporters due to increased spending from clients in Western markets.

But US-China trade tensions have sparked fears for the global economy, with the International Monetary Fund forecasting the weakest growth in a decade.

Many financial agencies have revised India’s growth projections for the 2019-20 financial year, with some warning that a stronger dollar would cause the rupee to fall throughout 2019, stoking inflation and eroding demand further.

On Thursday, ratings agency Moody’s revised the country’s GDP growth forecast to 5.8 per cent from a previous estimate of 6.2 per cent for the financial year 2019-20, lower than the 6.1 per cent projected by the Reserve Bank of India.

TCS shares were down 0.80 per cent in Mumbai after the earnings announcement.