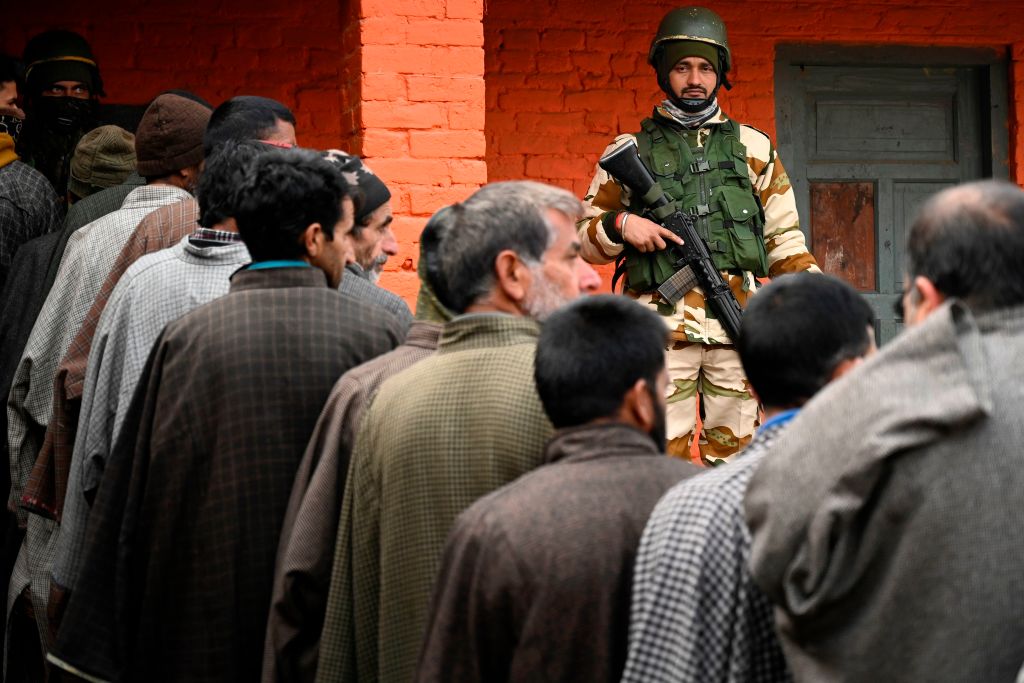 An Indian paramilitary soldier stands guard as voters stand in a queue to cast their ballots during a local poll in Jammu and Kashmir in December 2020. (Photo by TAUSEEF MUSTAFA/AFP via Getty Images)

While former chief ministers of erstwhile state Jammu and Kashmir such as Omar Abdullah and Mehbooba Mufti have slammed the election officials’ decision that the union territory is likely to have 25 lakh (2.5 million) new voters in the next election with non-local people registering to cast ballot for the first time in the region, terror group like Kashmir Fight has threatened to intensify attacks on non-locals.

Jammu and Kashmir has not seen an elected government for more than four years and elections are expected next year.

The situation in the union territory, which has seen relentless cases of targeted killings, turned explosive after its chief electoral officer Hirdesh Kumar announced that non-locals, including employees, students, labourers or anyone from outside Jammu and Kashmir who is living there “ordinarily” can register their names in the voting list and case ballots in J&K elections.

“An employee, a student, a labourer or anyone from outside who is living ordinarily in J&K, can enlist his or her name in the voting list. The documents will be scrutinised by government officials concerned who will take a decision after being satisfied about the claim,” Kumar said.

He said the requirement of domicile is not necessary for outsiders to get enlisted as voters. He also said that personnel from the armed forces from other states who are posted at J&K’s peace stations are also eligible for registering names in the voters’ list.

The top electoral officer told the media that more than 20 lakh (2 million) new voters are expected to be enrolled in the region ahead of the next elections. This could increase the voter count by more than a third, adding to the current 76 lakh (7.6 million) voters in the union territory.

“After abrogation of 370, those who couldn’t vote earlier can now register as voters. We are expecting an addition of (20-25 lakh) new voters in the final list,” he said.