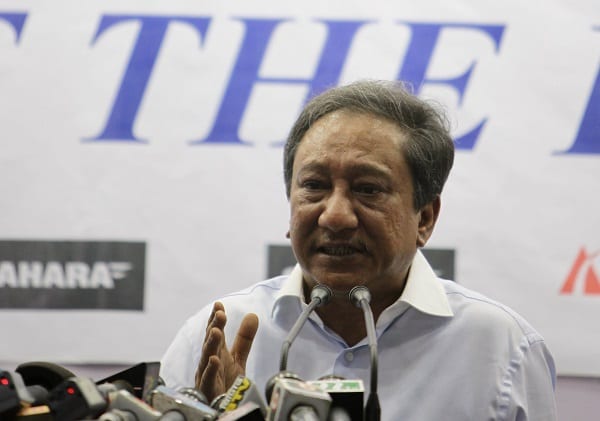 Bangladesh players called off the strike after BCB agreed to their demands of better pay package at the international and first-class level days before their four-week long tour of India where they are supposed to play 3 T20s and two Tests (Photo: STR/AFP via Getty Images).

BANGLADESH Cricket Board president Nazmul Hasan ‘Papon’ has alleged that there has been constant attempts to sabotage Bangladesh’s upcoming tour of India and the strike by country’s top cricketers with 11-point demand was an extension of that.

Bangladesh players called off the strike after BCB agreed to their demands of better pay package at the international and first-class level days before their four-week long tour of India where they are supposed to play 3 T20s and two Tests.

“You people (media) haven’t yet seen anything about the India tour. Just wait and watch. If I am saying that I had specific information that this was a conspiracy to sabotage India tour, then you should believe me,” Hasan told country’s premier bengali daily ‘Prothom Aalo’ in an interview.

Asked to explain in detail why he thought so, Hasan has expressed his suspicion in the manner senior opener Tamim Iqbal has pulled out of the tour citing his wife’s delivery as a reason after initially agreeing to only skip the final Test.

“Tamim had initially told me that he will only skip the second Test (in Kolkata from November 22-26) for the birth of his second child. However after the meeting with players, Tamim comes to my room and said, he wants to opt out of whole tour. I asked him ‘why so?’ but he simply said he won’t go,” Hasan revealed to the Bengali daily.

Bangladesh are due to arrive in New Delhi on Wednesday, October 30 but BCB president is sceptical that there could be a few more pull-outs.

“Now after this, I won’t be surprised if I find that someone else pulls out at the eleventh hour when we would be left with no other options. I have called Shakib to have a chat. Now if he also pulls out, where do I even find a captain? I might have to change whole combination. What do I even do with these players,” he said.

The top boss is still livid with the arm-twisting tactic employed by senior cricketers and feels he made a mistake by agreeing to their demands.

“I still can’t believe it. I speak to them everyday. They didn’t even intimate me before calling a strike. I feel that it was a mistake on my part to have agreed to their demands. I should have never done that,” he said.

“I should have told the players, ‘Unless you call off strike, we will not sit with you guys across the negotiation table. Speaking to various member boards, I felt that this should have been our approach but the media also created pressure on us,” Hasan also added.