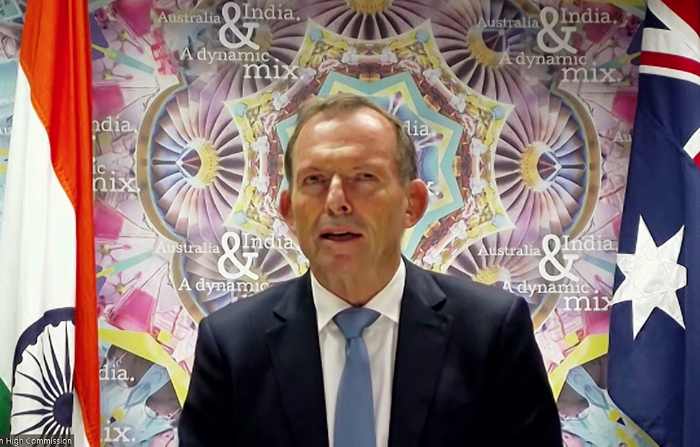 AUSTRALIAN prime minister’s special trade envoy Tony Abbott on Friday (3) expressed optimism that his country and India would abide by the deadline of finalising the proposed trade pact which aims at enhancing their economic ties.

India and Australia have agreed to finalise a long-pending free trade agreement, officially called the Comprehensive Economic Cooperation Agreement (CECA) by the end of next year and an early harvest trade deal by the conclusion of the current year, Press Trust of India reported.

The two nations also liberalise norms for improving trade in services and boost investments in a CECA.

“The main purpose of this visit is to try to ensure that we get the best possible trade deal between India and Australia as quickly as possible,” Abbott, a former Australian prime minister, told reporters in a virtual press conference in New Delhi.

“Based on the discussions last night with (Commerce and Industry) Minister Piyush Goyal and senior members of his team, I am confident that we can do a very good early harvest deal, which is larger rather than smaller, by the end of the year or very early in the new year,” he said, adding, “I am certainly confident, based on the discussions we had last night, that the time table will be met.”

The two countries launched negotiations for a CECA in May 2011 but the talks were suspended in 2015 due to certain disagreements over issues such as market access in agriculture and dairy products which Australia had sought and over India’s demand of visa liberalisation for professionals.

He said, “I am confident that we can make strong progress and one of the areas where we can make a strong progress even in the early harvest agreement is wine. I am hoping that more and more people in India will have an affordable opportunity to experience this great Australian product in the months and years ahead.”

Indian commerce and industry minister Piyush Goyal tweeted about his meeting with Abbott saying, “Met with @HonTonyAbbott, Special Trade Envoy of the Prime Minister of Australia. Had an extensive discussion on the huge potential India & Australia have to further energise & expand our bilateral ties through Free Trade Agreement (FTA) for mutual economic prosperity.”

Met with @HonTonyAbbott, Special Trade Envoy of the Prime Minister of Australia.

Had an extensive discussion on the huge potential India & Australia have to further energise & expand our bilateral ties through Free Trade Agreement (FTA) for mutual economic prosperity. 🇮🇳🇦🇺 pic.twitter.com/lq1LyNGUWg