Tracking upward trends of Indian investment in the UK 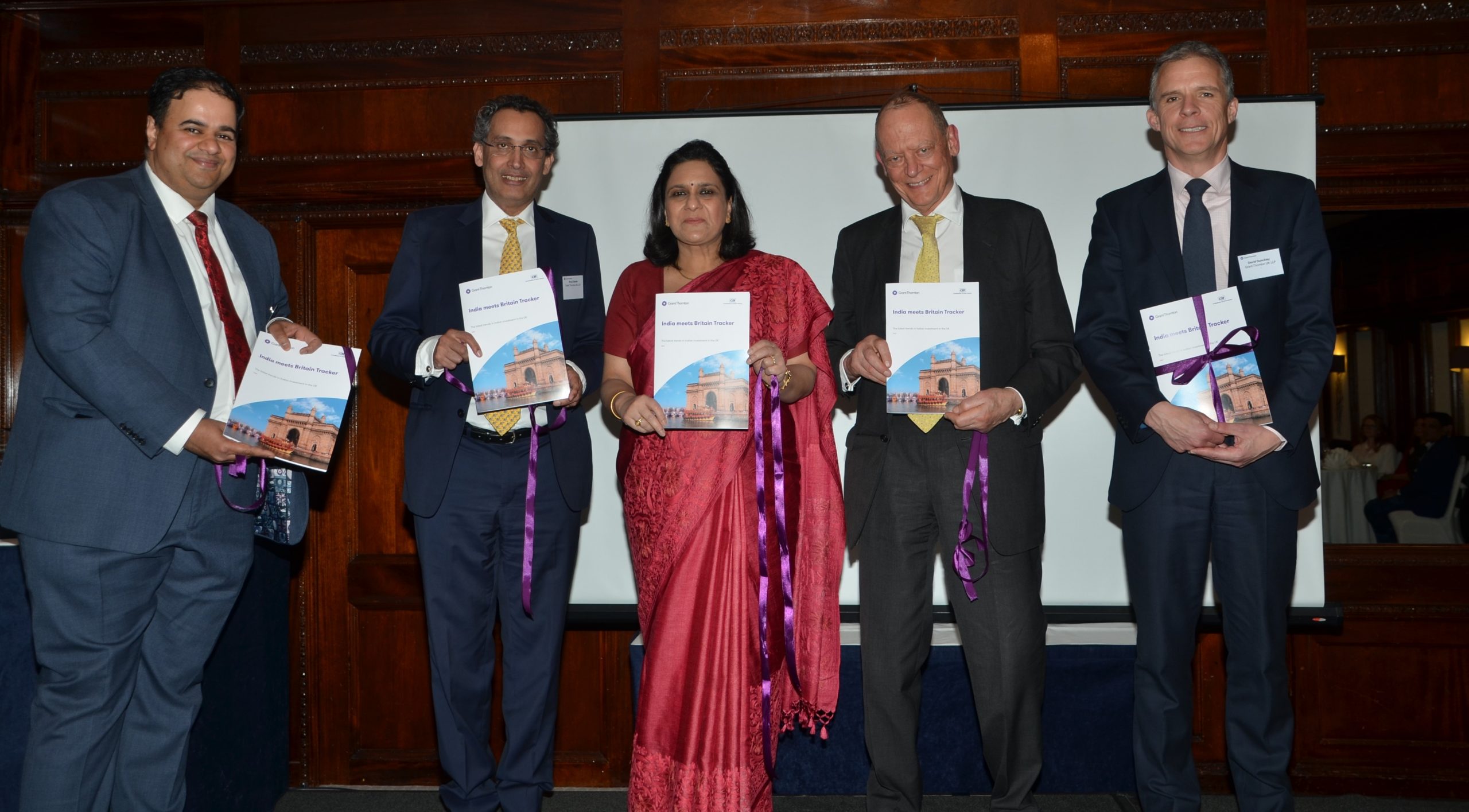 THE shadow foreign secretary David Lammy and his Labour front-bench colleague, Preet Gill, the shadow international development secretary, have both dismissed Boris Johnson’s recent trip to India as being of little consequence.

But Grant Thornton’s report, India meets Britain Tracker: The latest trends in Indian investment in the UK 2022, indicates that the British prime minister has a better grasp of just how crucial India is to the UK economy, and that an interim trade agreement “by Diwali” between the two countries is a goal worth pursuing.

Lammy had tweeted: “The fact that Boris Johnson is running scared from updating parliament on his fruitless trip to India shows it was nothing more than a pathetic attempt to distract from his lies and law-breaking at home.

The Grant Thornton report, compiled with the help of the Confederation of Indian Industries (CII) and launched last week, analysed the performance of 900 Indian companies in the UK, up from 850 in 2021. The report says 26 per cent of them have at least one woman on their board, compared with 17 per cent of Nifty500 companies. They have a total turnover of £54.4 billion, an increase from £50.8bn in 2021. And they paid £304.6 million in corporation tax, compared with £459.2m in 2021.

The Tracker report does not include companies owned by British Indians or the UK branches of firms with headquarters in India.

The report, now in its ninth edition, sets out which 900 companies have been studied: “The Tracker includes Indian-owned corporates with operations headquartered or with a significant base in the UK, with turnover of more than £5m, year-on-year revenue growth of at least 10 per cent and a minimum two-year track record in the UK, based on the latest published accounts filed as at March 31, 2022.

“To compile the India meets Britain Tracker 2022, Grant Thornton analysed data from 900 UK-incorporated limited companies that are owned directly or indirectly, or controlled, by either an Indian-incorporated parent or an Indian citizen resident outside the UK.

” It commented: “The increase in the number of companies and number of people employed is remarkable in the context of Covid-19 disruption.” The report states: “During his visit, prime minister Johnson announced commercial deals by UK and Indian businesses worth more than £1bn in new investments and export deals in areas from software engineering to health, creating almost 11,000 jobs across the UK.”

The report makes it clear that Johnson’s visit was neither “fruitless” nor a “vanity trip”.

It says: “Free trade negotiations launched this year have the potential to transform the relationship between India and UK. A deal between the two countries, currently the fifth and sixth-largest economies in the world, would drive a dramatic increase in the two-way flow of investment and opportunities.”

Eastern Eye discussed the report in an exclusive interview with its principal author, Anuj Chande, partner and head of South Asia Business Group at Grant Thornton.

Asked whether a UK-India trade agreement was dependent on Johnson remaining prime minister, Chande said: “Obviously, there is a personal relationship between Modi and Johnson. But I think the strength and depth of the UK-India relationship outlives any change in prime minister.”

He added: “He’s [Johnson] very committed to doing something with India. He enjoys doing business with India. He sees the potential of India. So there’s no doubt that it’s very much something that he’s emotionally attached to and wants to succeed.”

As to what kind of deal was likely, Chande said: “I think it’ll be an interim as opposed to the final deal. It’s a bit ambitious to expect the final deal to be done by Diwali. They will try and deal with some of the low-hanging fruit, some of the easier issues to deal with.

“It’ll be more about reducing duties on some engineering and healthcare products exported from the UK to India. They may also deal with the social security imbalance that exists, where Indian expatriates here have to wait five years before they have access to social security, whereas a US counterpart has to wait less time.

“Whisky is always mentioned as a hot topic. But I don’t know whether the Indian government will necessarily give in that easily on that.”

Chande reckons the 2.5 million-strong Indian diaspora in the UK has a key role to play: “They’re interpreted as this living bridge between India and UK. So they promote India to UK companies because they come from a culture they understand. They have family there. They know the potential of India. They know the benefits of India so they can use that knowledge and experience to educate UK companies that there is a huge market opportunity.”

He pointed out: “There are still a lot of UK companies that don’t really think about India in terms of an export market or in terms of setting up business there. So the diaspora do have a part to play because they’re not so cautious.”

Getting rid of non-domicile status – as the Labour party has pledged to do – may deter many Indian investors from coming to the UK, Chande warned.

Non-doms pay tax on their UK earnings, but on overseas earnings, they are liable to pay tax only if these are brought into the UK. This practice has existed for 200 years. But Labour targeted Akshata Murty, wife of the chancellor Rishi Sunak, because of her non-dom status, even after she volunteered to pay the extra tax on her foreign earnings from Infosys shares.

Chande explained: “There are a lot of Indian families that are setting up base to become residents here (in the UK) because their children are going to education here. And for them, the non-dom tax benefit is very important. They don’t have any intention to necessarily live here for the rest of their lives. But they want to be here while the kids are being educated. They find the UK is a comfortable place because of the huge diaspora community, the food, language and everything else. So for them, any potential change in the non-dom status would be a major factor in their decision as to whether they would remain in the UK.

“Whether the Labour party gets rid of it is a different matter. But (for many Indians), that would be a negative factor.”

There was a special focus on 37 companies whose revenues had grown by at least 10 per cent. They had an average growth of 38 per cent, a combined turnover of £1.6bn and 5,077 employees.

“Of the 37 fastest-growing companies, 33 have featured in previous Trackers and show how Indian companies are achieving sustained growth. Four of this year’s Tracker companies have appeared in it for three consecutive years – these are Hinduja Global Solutions Ltd, Marksans Pharma Ltd, Route Mobile, and Zensar Technologies Ltd.

“This year, for the first time, more of the fastest growing companies are located outside London (20 companies) than in London (17 companies). Outside London, the north is the most popular region, with 22 per cent of all tracker companies located there.”

The report acknowledges that UK-India mergers and acquisitions activity “was sluggish, both in terms of the number of deals being made and the overall value of deals. Nevertheless, several notable deals went through. Wipro, India’s third-largest IT company, acquired Capco, a global management and technology consultancy to the banking and financial services industry, for $1.45bn (£1.18bn). The deal will make Wipro one of the largest providers of integrated, end-to-end consulting, digital, cloud and IT transformation services.

“Bharti Enterprises, one of India’s most high-profile business groups, acquired a strategic stake in British broadband satellite communications company Oneweb, in a deal worth $500m (£405m).

The Tracker deals with the recovery from the pandemic: “Despite its terrible impact, the global health emergency delivered positive examples of the close relationship between India and the UK. In April 2021, the UK sent more than 600 pieces of vital medical equipment to India to support the country in its fight against Covid-19. This included ventilators and oxygen concentrator devices. Later in the year, an emergency appeal by the British Asian Trust raised over £4m, including £2m in government match funding.

“The past year has brought impressive evidence of the deep ties between India and the UK, with the two countries collaborating on vaccines and medical support to tackle the pandemic. The threat from Covid-19 seems, at last, to be subsiding and the two countries can now focus on deepening their relationship further for the future.

“As 2021 began, the pandemic continued to exert its impact worldwide, with both the UK and India experiencing further waves of Covid-19 during the first half of the year. Despite this, Indian businesses in the UK succeeded in expanding their combined turnover and increasing the number of jobs they support. The growth in the number of Indian-owned companies in the UK, identified by our research, is remarkable and reflects the increasing appetite for Indian businesses to set up greenfield operations and make investments in the UK despite Brexit and Covid-19 challenges.

“Against the backdrop of pandemic-related disruption, India remained a leading source of foreign direct investment into the UK during 2020-21, accounting for 99 FDI projects, second only to the United States in terms of project numbers.”

Chande, who launched the tracker at an event at the St James’ Court Taj Hotel in London last Thursday (5), said it “has been the barometer of Indian investment in the UK for the last nine years. This year is particularly relevant in the context of the pandemic and its impact on Indian subsidiaries in the UK.

“The UK and India are now entering a new higher level of India-UK partnership. We have the UK-India free trade agreement that is under negotiation with the aspirational target that is set by both prime ministers for something like Diwali time.

“Grant Thornton has been involved in in this corridor for the last 30 years. We feel that with the India-UK Free Trade Agreement we actually see numbers growing and look forward to the next decade where we will see trade doubling or tripling.”