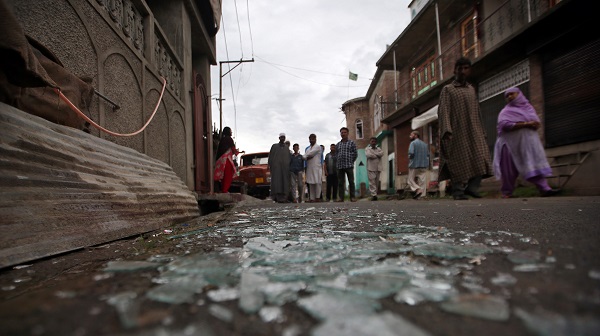 “One terrorist killed… Arms and ammunition recovered,” Kashmir Zone Police said on Twitter, adding that one police officer had been killed and another was being treated in hospital (REUTERS/Danish Ismail).

A MILITANT and a police officer were killed in a gun battle in Kashmir, police said Wednesday (21), as tensions simmered in the territory.

The clash in north Kashmir’s Baramulla district was the first to be reported by the authorities since New Delhi revoked the autonomy of Kashmir and imposed a curfew earlier this month.

“One terrorist killed… Arms and ammunition recovered,” Kashmir Zone Police said on Twitter, adding that one police officer had been killed and another was being treated in hospital.

A later tweet said that the dead militant was identified as a local man ‘affiliated’ with Lashkar-e-Taiba (LeT).

LeT is a UN-listed militant organisation based in Pakistan and is accused by India and Washington of masterminding the attacks on the western city of Mumbai in 2008 that killed 166.

Clashes are common between Indian security forces and militants opposed to Indian rule, with tens of thousands of people killed in the past 30 years, most of them civilians, adding to public resentment towards New Delhi.

India deployed tens of thousands of troops ahead of its August 5 move in order to contain public anger, severely restricting the movement of people and cutting landlines, mobile phones and the internet.

Some of the curbs have begun to be eased in recent days with few landlines operational again and schools re-opened, although next to no children attended.