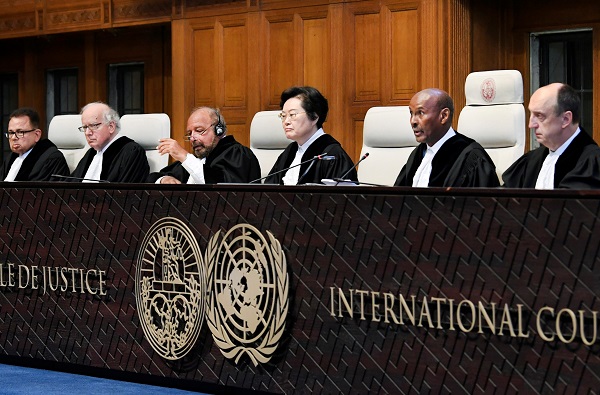 Judges are seen at the International Court of Justice before the issue of a verdict in the case of Indian national Kulbhushan Jadhav who was sentenced to death by Pakistan in 2017, in The Hague, Netherlands July 17, 2019 (REUTERS/Piroschka van De Wouw).

THE World Court on Wednesday (17) ordered Pakistan to review the death penalty given in 2017 to former Indian navy commander Kulbhushan Sudhir Jadhav who was convicted of being a spy.

The 16-judge panel said Pakistan has to provide an “effective review” of the case and added that a “continued stay of execution” of Jadhav was needed for that to happen.

“I am sure Kulbhushan Jadhav will get justice,” he added.

India had asked the UN court, formally known as the International Court of Justice (ICJ), to intervene in the case, as it said Jadhav had been given an unfair trial and had been denied diplomatic assistance by Pakistan.

Pakistan argued that based under a bilateral treaty between the nations it was not obligated to allow diplomatic assistance for people suspected of being spies or terrorists.

The court dismissed that argument and found by 15 votes to one that Pakistan had breached Jadhav’s rights under the Vienna Convention on Consular Relations, by not allowing Indian diplomats to visit him in jail or assist him during his trial at a military court.

The ICJ has no means to enforce its rulings which are final and without appeal. It is unclear from the ruling what exactly would constitute an effective review of Jadhav’s sentence.

Judges did say that Islamabad would need to take all necessary measures including changing their laws to ensure Jadhav’s case will be properly reviewed.

Pakistan’s attorney general Anwar Mansoor Khan told journalists outside the Peace Palace in the Hague that he considers the case “a clear win for Pakistan” as the court did not order the acquittal and release of Jadhav as India had sought.

He added that Pakistan would consider the review of Jadhav’s case as ordered by the UN court but said a Pakistani court of law would have to decide how to proceed with that. When asked by journalists if that meant Indian diplomats would get access to Jadhav, he stressed that was up to the court.

“That court of law will act in accordance with the provisions contained in the Vienna conventions so we will have to wait for the court of law to give its judgment,” Khan said.

Pakistan’s foreign minister Shah Mehmood Qureshi said the ruling was “appropriate” and an endorsement of his country’s stance.

“The point is whether Commander Jadhav didn’t have a right to review under our laws – that was there,” he said. “The decision which the military court gave, he could have appealed that.”