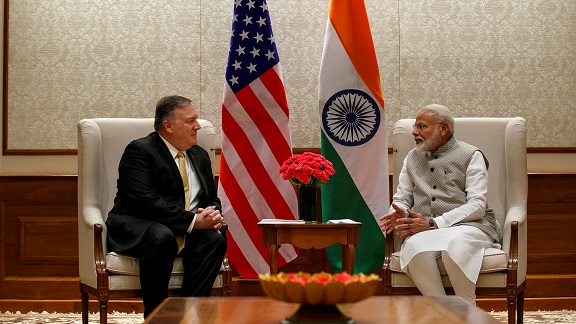 US secretary of state Mike Pompeo met Indian prime minister Narendra Modi today (26), trying to chart a path that keeps the Asian ally onside politically even with the two countries at loggerheads over trade and a $5.2 billion Russian arms deal.

As a democratic heavyweight in a region dominated by authoritarian China, New Delhi is a natural bedfellow in Washington’s effort to counter Beijing’s rise and in 2016 the US designated India as a “major defence partner”.

But president Donald Trump’s “America First” mantra and his easy resort to tariffs in what he says is a bid to bring jobs back to the US has irked New Delhi.

Pompeo and Modi gave no news conference but the American was due to give a statement to media later on Wednesday (26).

The US-India relationship is particularly tricky because of New Delhi’s own well-developed protectionism, often expressed through the red tape that prevents foreign companies from competing in the huge market of more than a billion consumers, critics say.

Pompeo’s talks with Modi Wednesday morning in New Delhi came ahead of the Indian prime minister’s meeting with Trump at the G20 in Japan later this week, where import levies are expected to loom large.

Trump has in addition to slapping tariffs on $200bn of Chinese imports and initiating trade battles with China, Japan, Mexico and the European Union also taken aim at India, calling the country the “tariff king”.

Ties deteriorated this month when the US ended India’s preferential trade status that allowed the Asian giant to send America $6bn in goods duty-free every year.

India retaliated with tariffs on 28 items imported from the US, including almonds, apples and walnuts products close to the hearts of voters in Trump’s rural base.

The US is also irked by what it sees as a growing thicket of Indian bureaucracy for US companies such as Walmart, which last year invested $16bn in Flipkart in a major bet on the local e-commerce market.

Other points of contention include Indian price caps on medical equipment and its insistence that personal data held by firms like Mastercard be stored within India.

This has reportedly led to US threats to cap H-1B visas, popular among Indian IT professionals, although US officials have denied this.

Besides trade, a major bone of contention between the two countries is possible US sanctions over India’s planned $5.2bn purchase of the S-400 missile defence system from Russia.

Russia has long been a major arms supplier to India, but New Delhi’s use of Moscow-made hardware complicates US efforts to bolster regional security cooperation to counter China, as well as its push to pressure the Kremlin.

Rising friction between the US and Iran have also affected India, with US waivers allowing New Delhi to buy Iranian oil having expired in May. India’s economy is highly reliant on crude imports.

Eliot Engel, the Democrat who heads the House Foreign Affairs Committee, said that recent US actions were at odds with Trump’s promises that he would be a “true friend” to India.

Washington needs to show a “predictable, coherent, and consistent strategy,” Engel told Pompeo in a letter, and to counter a growing view that it is seeking to “coerce” India.