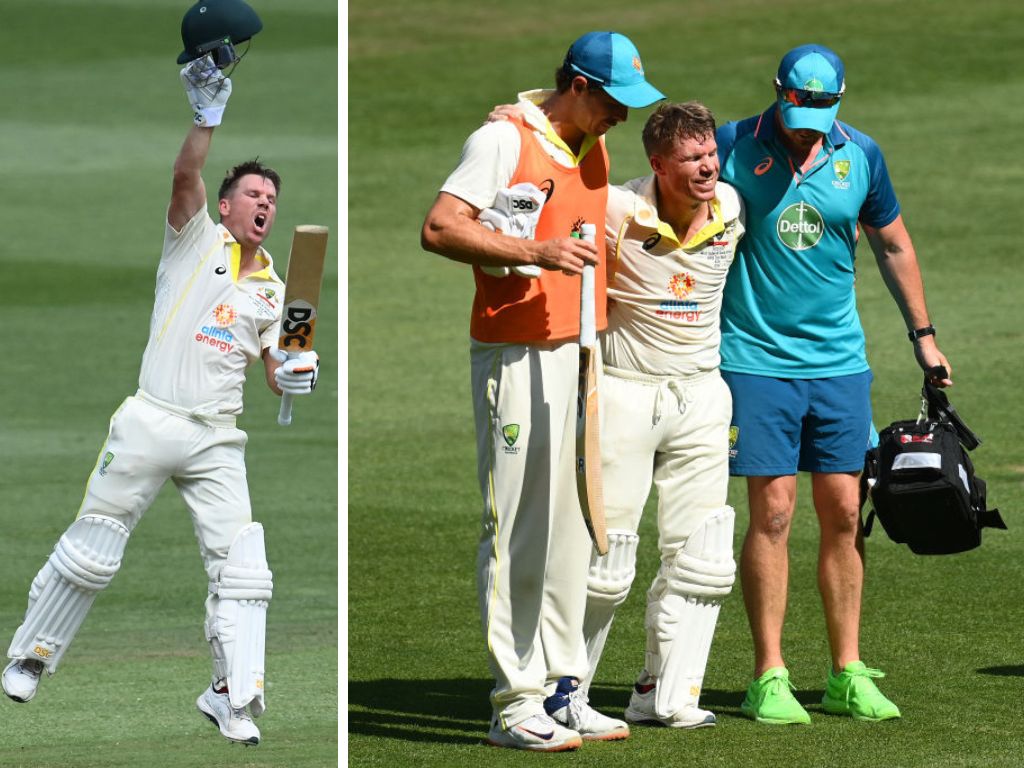 (L-R) Australia opening batter David Warner celebrates his double century against South Africa in the second Test at Melbourne Cricket Ground with a jump (Photo by Quinn Rooney/Getty Images) and as a result of his act, he worsened his cramped leg conditions and had to retire hurt on the second day of the match. (Photo by Quinn Rooney/Getty Images)

It was a perfect anti-climax for ace Australia batter David Warner at the Melbourne Cricket Ground (MCG) on Tuesday (27).

The hard-hitting southpaw put end to his century drought in Tests by slamming a brisk double ton in the ongoing second match against South Africa at the iconic ground but then sustained an injury while celebrating the feat with a leap.

A double century for David Warner!

The 36-year-old opening batter had been suffering from cramps before reaching the 200-run milestone and worsened the condition with his overenthusiastic celebration. He was seen clutching the thighs as he sought medical aid but eventually retired hurt.

Warner remained unbeaten for 200 off 254 balls as Australia put up a mammoth 386 for 3 in reply to the Proteas 197 all out at stumps on Day 1 and looked favourites to win the game. Warner would have ample time to return to the crease after overcoming the physical challenge since the hosts have a lot of wickets and time to play for.

Warner also crossed 8,000 runs during his knock and he is the eighth Australia batter to accomplish the feat. It was his first Test ton since January 2020 and third double century overall. He has slammed 16 fours and two sixes during the knock.

Australia won the low-scoring first Test by six wickets at The Gabba, Brisbane, and a win at the MCG would see them pocket the three-match series.