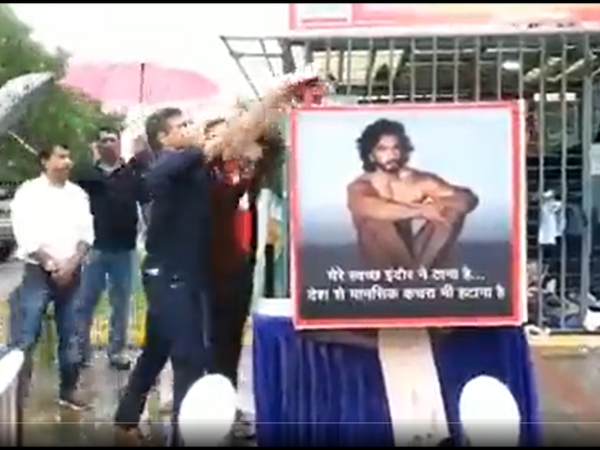 People donate clothes at a camp which was organised for Bollywood actor Ranveer Singh who recently went butt naked for a photoshoot. (Picture: Twitter screengrab)

IN India, filmstars are often revered as demigods. But at the same time, when a controversy erupts over any of their word or action, the same followers go crazy. Recently, star actor Ranveer Singh stormed into the headlines after posing naked in an exclusive photoshoot for Paper magazine and it has created quite a stir on social media.

While reactions of all sorts have poured in for the 37-year-old actor who has acted in films such as ‘Padmavat’, ‘Gully Boy’, ’83’, among others, a unique one was witnessed in the city of Indore in the central Indian state of Madhya Pradesh where a group of people organised a cloth-donation drive for Singh.

A video of the event went viral on social media where it is seen that people donating clothes into a box kept on a table on a street in rain. The box carried a picture of Singh from the photoshoot, butt naked. Another side of the box also mentioned something derogatory. It said in Hindi ‘Sankat mein Bollywood’ (Bollywood is in crisis) and following it, ‘Mansik Kachra’ (Mental garbage) was written in bigger fonts.

In the western Indian city of Mumbai, police registered a first information report against the actor on grounds of “hurting sentiments of women” after the pictures from his nude photoshoot went viral.

Indian actor-parliamentarian Mimi Chakraborty asked if women would have been appreciated if they had shared similar pictures.