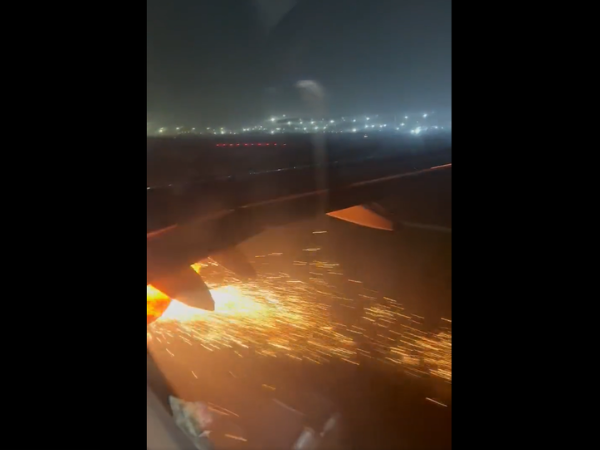 An IndiGo plane flying from Delhi to Bengaluru was grounded at Delhi’s IGI Airport after fire sparks were seen under its wings. (Picture: Twitter screengrab/@real_Evil_Bert)

India’s aviation regulator said Saturday (29) it was probing an engine fire that broke out on a passenger jet just as it was about to take off from Delhi airport.

The IndiGo airlines flight was carrying 184 people to tech hub Bengaluru and had just begun its thrust on the runway when the fire was spotted, forcing its pilot to return to the bay and evacuate the cabin.

A full emergency was declared at the Delhi IGI's airport after a suspected fire broke out on Bengaluru-bound IndiGo airlines flight 6E 2131. pic.twitter.com/O72JwKParP

No injuries were reported and officials said the plane was emptied safely.

“The priority is to carry out a detailed investigation of the incident and ascertain the reasons for the fire in the engine,” Arun Kumar, chief of the Directorate General of Civil Aviation told reporters.

“Fortunately, the fire was extinguished swiftly and the aircraft is now grounded.”

Passengers told local media they had heard a loud bang before spotting flames from the engine fire.

IndiGo said the aircraft experienced a technical issue, “immediately after which the pilot aborted the take-off and the aircraft safely returned to the bay”.

“All passengers and crew are safe and an alternative aircraft was arranged to operate the flight, which took off at 12.16 am on Saturday,” the company said in a statement.

IndiGo is the country’s largest private budget airline and controls almost 60 percent of the domestic market.

Seventeen people were injured when a SpiceJet flight from Mumbai struck turbulence in May, while in July a Dubai-bound plane was forced to make an emergency landing in Pakistan due to a faulty cockpit light.