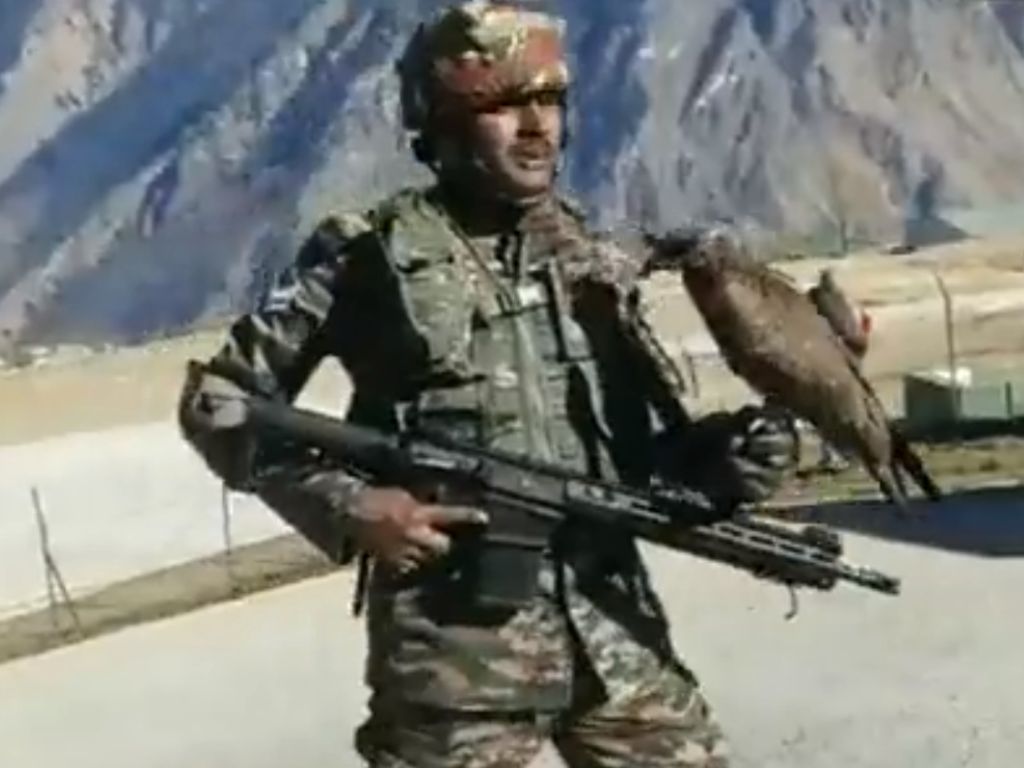 An Indian soldier holds a kite, trained by the country’s army to prey on enemy drones, for demonstration at the ongoing Indo-US wargame exercise in Auli in the northern state of Uttarakhand bordering China. (Picture: Twitter screengrab/@ANI)

In a unique move, the Indian Army has trained eagles to take down surveillance drones deployed by enemies. The move has come at a time when the country’s Border Security Force (BSF) is carrying out vigil for flying objects smuggling drones and weapons from across the border with Pakistan.

According to reports, the army has trained the predatory birds to take down the flying objects. One of the birds’ daring act was shown during the troops’ ongoing joint military drills with the US in Auli in the northern Indian state of Uttarakhand bordering China.

#WATCH | A Kite trained by the Indian Army to prey on drones displayed in action at the ongoing Indo-US wargame Yudhabhyas in Auli, Uttarakhand pic.twitter.com/Bjha3gKaNS

The soldiers also displayed the use of assault dogs in counter-terror operations.

In the war games that are taking place just 100 kilometres from the China border, soldiers of the two countries trained in high-altitude warfare amid extremely cold conditions.

‘Yudh Abhyas’ (war exercise) is held annually between India and the US to exchange the best practices, tactics, techniques, and procedures between their armies.

India dismisses China’s concern over joint military exercises with US

On Thursday (1), India dismissed China’s objection to the joint military exercise near the Line of Actual Control (LAC) between the two Asian nations in Uttarakhand, saying it did not give veto to third nations on such issues.

Hitting back at China, India’s external affairs ministry spokesperson Arindam Bagchi said the joint exercises with the US in Auli has nothing to do with the 1993 and 1996 agreements with China.

“But since these were raised by the Chinese side, I must emphasise that the Chinese side needs to reflect and think about its own breach of the agreements of 1993 and 1996,” Bagchi said, responding to questions at the weekly briefing of the ministry, Press Trust of India reported.

“India exercises with whomever it chooses to and it does not give a veto to third countries on these issues,” he said.

On Wednesday (30), China said it was opposed to the joint Indo-US military exercises and claimed that it violated the spirit of the two border agreements signed between New Delhi and Beijing.

To questions on protests in parts of China against prolonged lockdowns and isolations to contain Covid-19, Bagchi said he would not comment on specific Covid strategies pursued by any country.

“We would hope that humanity as a whole is able to emerge fully from Covid at the earliest. But insofar as specific Covid strategies that each country may be pursuing, I might not like to get into that. Just like to hope that we are able to come out of Covid,’ he said.