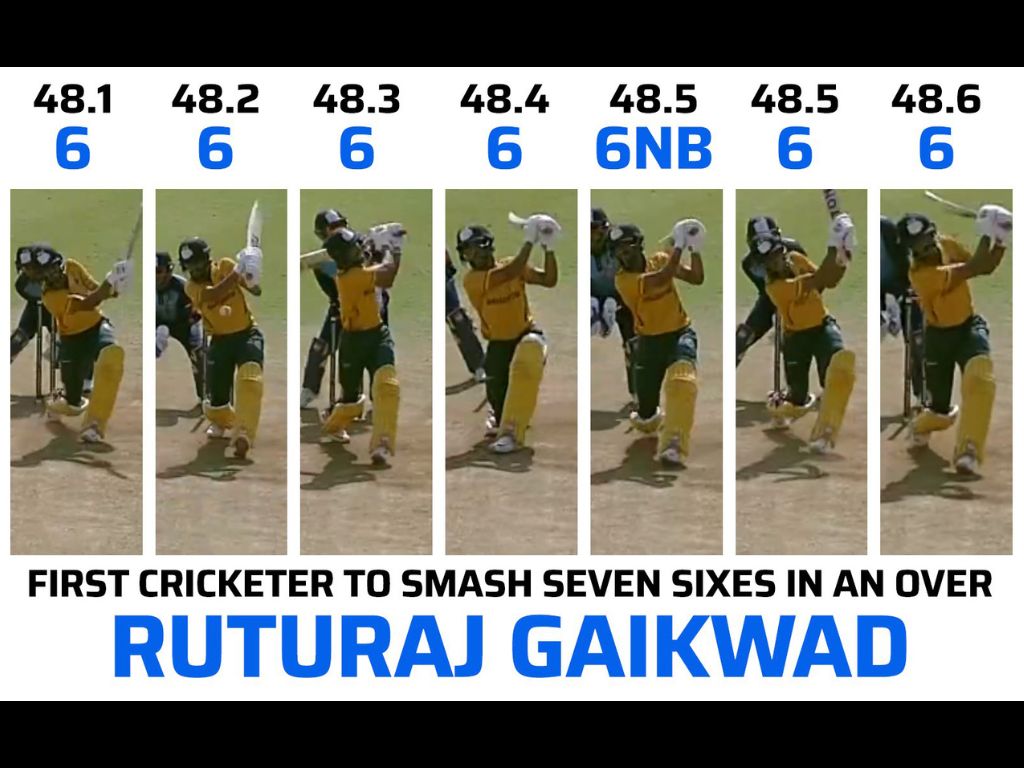 A sequence of photos shows Maharashtra opener Ruturaj Gaikwad creating history by becoming the first batter ever in white-ball cricket to strike seven consecutive sixes in an over during Maharashtra’s match against Uttar Pradesh in the quarter-final of the Vijay Hazare Trophy 2022, in Ahmedabad, Gujarat, on Monday, November 28, 2022. (ANI Photo)

India batsman Ruturaj Gaikwad on Monday smashed an unprecedented seven successive sixes in one over of a 50-overs domestic match — courtesy of a no-ball.

Gaikwad, who has played one ODI and nine Twenty20 matches for India, hammered 42 runs for Maharashtra in a seven-delivery over against Uttar Pradesh.

Ruturaj Gaikwad smashes 4⃣3⃣ runs in one over! 🔥🔥

The quarter-final of the Vijay Hazare Trophy — India’s inter-state 50-over competition — took place at the world’s biggest cricket stadium, in Ahmedabad.

Gaikwad is the first player to hit seven sixes in one over in a List A category match.

But Lee Germon of New Zealand holds the all-time List A record with eight sixes in a bizarre 77-run over of multiple deliberate wides and no-balls in a 1990 Shell Trophy match, when Wellington intentionally gave away runs to try to tempt Canterbury into recklessness.

Left-arm spinner Shiva Singh was on the receiving end of his six-hitting blitz in the 49th over.

Gaikwad made his T20 international debut last year after a sterling performance as an attacking opener with Chennai Super Kings in the Indian Premier League.

It is the second record by an Indian batsman in as many weeks, after Tamil Nadu’s N Jagadeesan smashed 277 against Arunachal Pradesh, the highest ever score in the 50-over format, surpassing the 268 of England’s Alistair Brown against Glamorgan in 2002.