WATCH: Instead of water, this hand pump in India spews out liquor 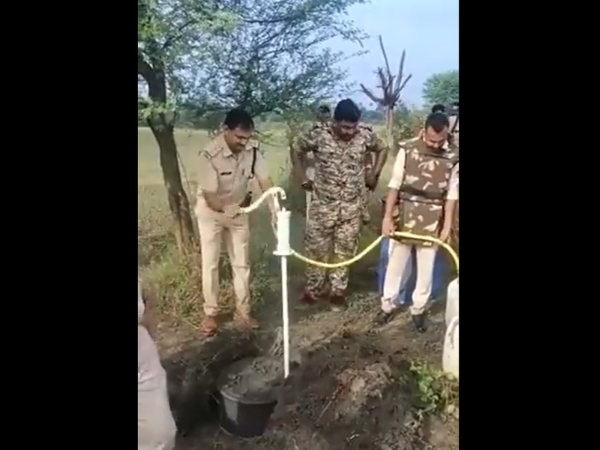 Police personnel pump out liquor from an underground drum filled with liquor in the central Indian state of Madhya Pradesh on Wednesday, October 12, 2022. (Picture: Twitter/@khatua_haris)

Hand pumps are generally associated with supplying water but in Bhanpura village in the central Indian state of Madhya Pradesh’s Guna district, a hand pump spew out liquor when police busted an illegal liquor den and seized huge stock, an official said on Wednesday (12).

Police raided the village on Monday (10) and during a search, they recovered a total of eight drums filled with raw liquor buried underground or hidden under fodder in agriculture fields.

“A hand pump attached with the drums of raw liquor hidden underground was also recovered. When police personnel started pumping it, liquor started coming out from the other end (joined by a pipe),” said Guna superintendent of police, Pankaj Shrivastava.

Police also recovered huge quantities of country-made liquor stored in drums which were hidden under the debris of fodder in farms.

“Prime facie, people dealing in illegal liquor trade had dug underground pits to hide liquor-filled drums. They were using a hand pump to take out liquor from these drums which are then filled in pouches and five-litre cans,” Shrivastava said.

He said police conducted the raid on a tip-off but the persons involved in the sale of illegal liquor managed to flee.

“Police have identified eight persons and a search is on to nab them,” the police officer said.

He said the village is dominated by a community and country-made liquor is being produced in almost every household there.

Shrivastava said the police had conducted raids in the past also.

Further investigation is underway, he added.