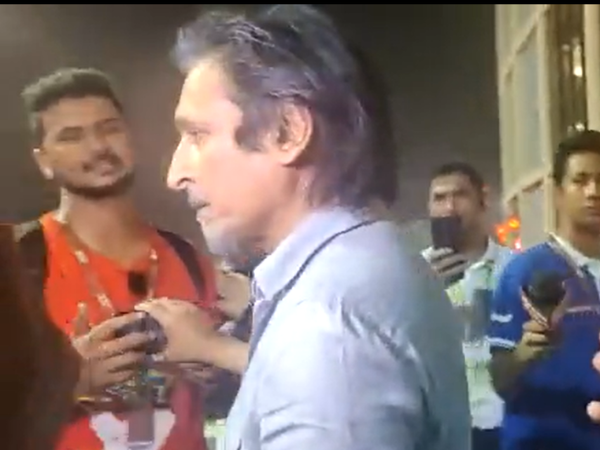 Pakistan Cricket Board chief Ramiz Raja confronts an Indian journalist after his country loses the final of Asia Cup 2022 against Sri Lanka in Dubai on September 11, 2022. (Twitter screengrab/@rohitjuglan)

Pakistan Cricket Board (PCB) chairman Ramiz Raja confronted an Indian journalist after his country lost in the final of Asia Cup 2022 against Sri Lanka at Dubai International Cricket Stadium in Dubai, UAE, on Sunday (11) and made the headlines for the wrong reasons.

The 60-year-old was speaking to journalists while leaving the stadium after Pakistan lost the match by 23 runs and when the Indian journalist asked him if he had any message for Pakistan’s dejected fans after the defeat in the title clash, Raja was visibly miffed. He countered the journalist for using the word “awam” (common people) and was not convinced even after the journalist tried to make him understand that it was a generic question and he did not intend to mock the Pakistan fans. He ended up grabbing up the journalist’s mobile phone to stop the recording. The PCB chief even hit back at the Indian journalist saying the people of India would be very happy that Pakistan had lost the final.

When the journalist asked him, “Awam badi nakhush hai. Unke lie koi sandesh? (The people must be unhappy. Do you have any message for them?), Raja said, “Dekhie aap India se honge, aapke (awam) toh bohut khush honge.” (You must be from India, your people must be very happy).

When the former said, “Hum khush nahi hai” (No, we are not happy), Raja counter asked, “Kaunsi awam? (Which people?)”

After this, Raja was seen trying to snatch the journalist’s phone and also slamming another fan, perhaps a fan, who had kept his arm over his shoulder. He asked him to remove the arm and stay away from the camera.

Sri Lanka came back strongly into the game after getting reduced to 58 for 5. They posted 170 for 6 and then bowled Pakistan out for 147.

This was the islander’s sixth Asia Cup crown. Only India (seven) have more Asia Cup titles than them. Pakistan have won it twice with the last one coming in 2012.