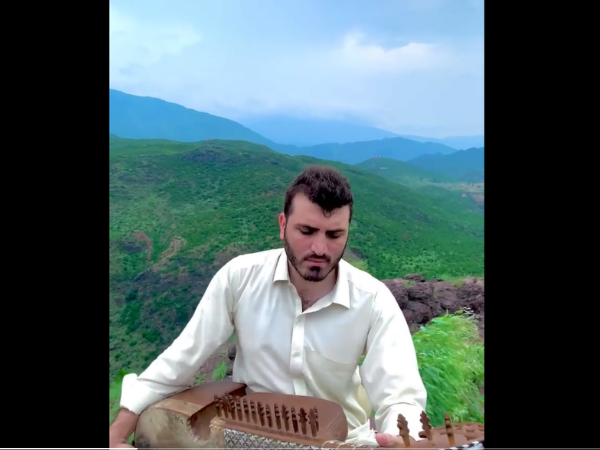 It is not often that people get to see messages of love flying from the soil of India and Pakistan towards each other. But as India on Monday (15) celebrated 75 years of its Independence, a rabab artiste from Pakistan dedicated a special gift to the people of India.

Siyal Khan, a ‘rabab’ (an instrument which is widely played in countries such as Pakistan and Afghanistan) player, shared a video on Twitter in which he could be seen playing India’s National Anthem — ‘Jana Gana Mana’. His rendition, aimed at promoting peace between the two neighbours, won many hearts online.

Khan, who hails from Upper Dir district of Khyber Pakhtunkhwa province of Pakistan, is a student of political science from the University of Peshawar, as per his Facebook bio.

In the video, Khan is seen playing the ‘rabab’ with the Lowari Top mountain pass in the background.

“Here’s a gift for my viewers across the border,” Siyal wrote sharing the video which was posted on Sunday (14), the day which marked 75 years of Pakistan’s Independence.

Here’s a gift for my viewers across the border. 🇵🇰🇮🇳 pic.twitter.com/apEcPN9EnN

In another tweet, Khan said, “Happy #IndependenceDay India. I tried the National Anthem of India as a token of friendship and goodwill for Peace, tolerance and good relations between us. #IndependenceDay2022.”

Happy #IndependenceDay India. I tried the National Anthem of India as a token of friendship and goodwill for Peace, tolerance and good relations between us. #IndependenceDay2022

Netizens absolutely Khan’s work and here are some reactions:

Music has no language or religion..It touches hearts and connects people..
Respect & Blessings for you..
🙌🏼🙏🏼🤲🏼

Thank You So Much For National Anthem. Happy independence Day all ppl from Both countries.
Wish Partition would have not taken place this hatred and lakhs of ppl have not to loose their

Thanks from an Indian Citizen. I wish your leadership and intelligence agency listen to the heart of a Pakistani people who want friendship with India