WATCH: The moment when former Pakistan PM Imran Khan was shot at 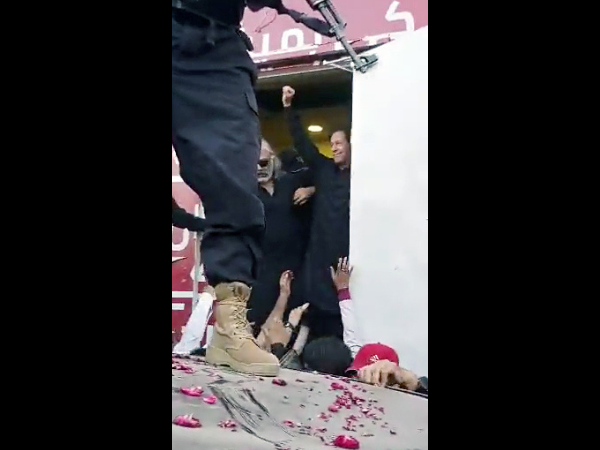 Former Pakistan prime minister and Pakistan Tehreek-e-Insaf (PTI) chairman Imran Khan got injured in leg in an attack by a suspected assailant near his container during a long march carried out by him, near Zafar Ali Khan chowk, in Wazirabad near Gujranwala, Pakistan, on Thursday, November 3, 2022. (ANI Photo)

Imran Khan, the former prime minister of Pakistan, had a close shave on Thursday (3) when bullets fired at him by an unknown person hit his leg at a political rally in Wazirabad near Gujranwala, located some 100 kilometres from Lahore in the Punjab province.

A video of the incident which many, including Pakistan president Arif Alvi, called an assassination attempt was stable but reports said he would not be able to walk for a few weeks.

*The real Footage when imran Khan was Attacked….* pic.twitter.com/c5eSkOXRsZ

The attack took place when the 70-year-old cricketer-turned-politician and leader of Pakistan Tehreek-e-Insaf party was on the top of a lorry along with his party leaders and supporters. Khan was travelling as part of his days-long protest march from Lahore to capital Islamabad.

Chaotic scenes were witnessed as multiple gunshots were heard and people ran in panic.

Khan’s senior aide Raoof Hasan told news agency AFP, “This was an attempt to kill him, to assassinate him.”

In a tweet, president Alvi also called it “a heinous assassination attempt”.

“I thank Allah that he is safe but injured with few bullets in his leg & hopefully non-critical,” he tweeted.

Pakistan has been grappling with Islamist militants for decades, and politicians frequently face life threats.

In 2007, Benazir Bhutto, the nation’s only woman prime minister leader till now, was killed in a suicide attack which still remains unsolved.