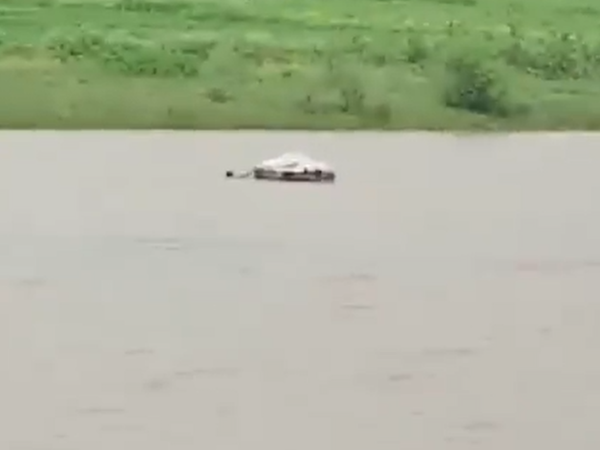 Villagers in Madhya Pradesh carry the corpse of a man through a flooded river in the absence of a road or bridge. (Picture: Twitter account @anuraag_niebpl)

In a heart-wrenching incident, a group of villagers in the central Indian state of Madhya Pradesh tied the corpse of a man to a floating rubber tube to make it cross a flooded river in times of heavy rains.

Reason? Lack of a proper road to reach the village for the last rites.

A video of the villagers carrying the floating body across the river went viral on social media after which a local administrative official said they were looking into the matter.

According to official sources, 55-year-old Vishmat Nanda, a resident of Thadpathara village of Anuppiur district of Madhya Pradesh, died of heart attack in a government hospital in neighbouring Dindori district on Sunday (14). Local chief medical and health officer SC Rai on Tuesday (16) said some villagers took Nanda to the hospital in Dindori where he died.

An ambulance took the body till Patharkucha but it had to stop there as the only road connecting Nanda’s village was closed because of a flooded Narmada river and there was no bridge over it. It was then when people from his village tied Nanda’s corpse to a floating rubber tube and crossed the river to reach the destination where the last rites were carried out.

Rai said he learned about the video, apparently shot at the swollen Narmada river flowing between Patharkucha and Thadpathara.

Local administrative official Abhishek Choudhary told Press Trust of India the matter has come to his notice. “We will look into the matter as to how such circumstances arose,” he said.