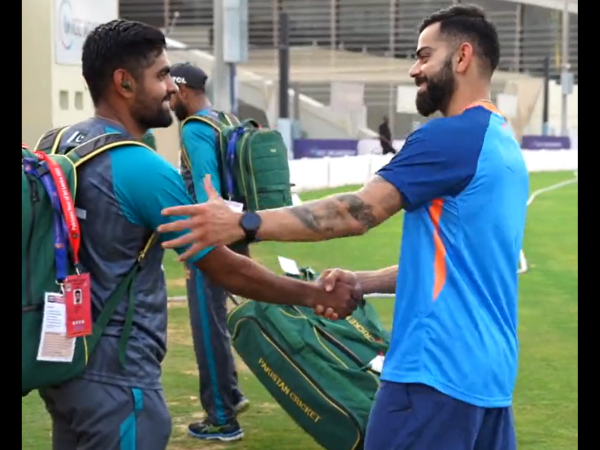 Virat Kohli and Babar Azam greet each other at Dubai ahead of the India-Pakistan clash in Asia Cup 2022. (Picture: BCCI Twitter account)

They do not often face each other on 22 yards but when they do, the cricketing fraternity explodes. Arch-rivals India and Pakistan will lock horns in a group match in the upcoming Asia Cup at the Dubai International Stadium in the United Arab Emirates on Sunday (28) and the heat is building up ahead of the mega fixture.

Two names that will be special in the upcoming clash are India batter Virat Kohli and Pakistan captain Babar Azam. The two batters, considered among the best in contemporary cricket, have had completely contradictory journeys to the Asia Cup but that one game could prove to be a make-or-break one for both.

Azam is currently in a great touch while Kohli is in the middle of an endless struggle. He has been facing flak from all quarters recently, even Azam came to his support and advised him to stay strong and wait for the phase to pass.

The two had a chance to meet each other during a practice session in Dubai on Wednesday (24) and the moment sent the social media into a frenzy.

In a video shared by the Board of Control for Cricket in India, Kohli was seen exchanging pleasantries with Azam. The clip was of only 35 seconds duration but the fans from across the borders were celebrating the meeting between the two giants.

Last year, too, Kohli and Azam had a similar meeting after Pakistan thrashed India by 10 wickets in the T20 World Cup at the same venue. The India batter was the captain of the Indian side then.

The two individuals share a healthy relation both on the ground and off it even though Azam has of late eclipsed Kohli in terms of records on the ground.