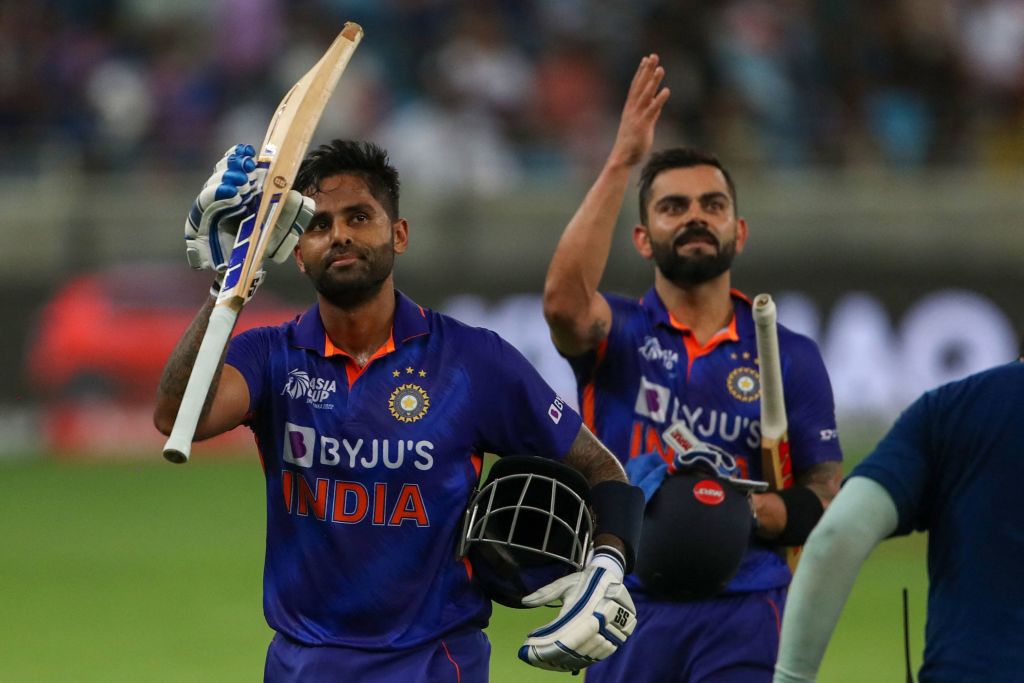 India’s Virat Kohli (R) and his teammate Suryakumar Yadav leave the field after their innings during the Asia Cup Twenty20 international cricket match between India and Hong Kong at the Dubai International Cricket Stadium in Dubai on August 31, 2022. (Photo by Surjeet Yadav / AFP) (Photo by SURJEET YADAV/AFP via Getty Images)

He regained some touch with the bat but on Wednesday (31), ace India batter Virat Kohli was found celebrating more the scintillating knock played by colleague Suryakumar Yadav in the group match against Hong Kong in Asia Cup at the Dubai International Cricket Stadium.

The 33-year-old, who hit unbeaten 59 off 44 balls — only his second international fifty of the year — added 98 runs with Yadav (68 not out in only 26 balls) in just seven overs — looked in awe of the latter while returning to the pavilion after India’s innings ended. Yadav’s knock included six fours and as many sixes, four of which came in the final over of the innings at the expense of medium pacer Haroon Arshad who gave away 26 runs. Kohli, on the other hand, hit one four and three sixes.

Kohli, who once was involved in an ugly incident with Yadav in the Indian Premier League, seemed to have enjoyed the knock of his junior teammate who had a disappointing outing against Pakistan on Sunday (28). The former India captain walked up to Yadav and embraced him after he slammed the fourth six in the final over and after the innings got over, bowed down to the batter. He was also seen talking towards the Indian dressing room and uttering “Kya hai yeh?” (what is this man?), expressing his disbelief over Yadav’s merciless hitting.

“Virat Kohli and Suryakumar Yadav all smiles as they should be. During that partnership of 98, he went out there with the intensity of scoring runs and he did that,” former New Zealand all-rounder Scott Styris said in the commentary box.

Yadav was rightly picked as the player of the match after India won the match by 40 runs to top Group A and advance to the Super Four stage.