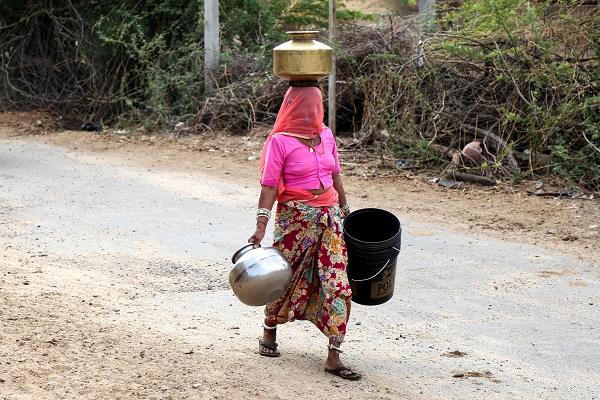 HER face veiled, Kiran Aherwal shoveled gravel into a broad platter, placed it on her head, then stepped off to help construct a new check dam in her thirsty village in central India.

Years of drought and water scarcity have often led her children to go hungry, she said – but she aims to change that.

As more rivers, reservoirs and wells go dry across Bundelkhand – a parched region of 20 million – Aherwal has joined about 600 “Jal Sahelis”, or water women friends, to try to fix the region’s perennial water woes.

The women – up to three in each of more than 200 villages – galvanise their communities to harvest rainwater, dig wells, de-silt ponds, build check dams and repair hand pumps.

“During summers, we have to get water from about 5 kilometres (3 miles) away. When there isn’t enough water, I can’t even make food on time or feed my children,” said Aherwal, 28, who became a Jal Saheli in her village of Agroutha in April.

“This will help solve our water problem. Our village will be able to drink water. We will get to irrigate our crops again.”

In earlier times, Bundelkhand, blighted by 13 episodes of drought in the last two decades, received 52 days of rainfall a year. But the number of days has more than halved since 2014, according to Skymet Weather, a private weather forecasting agency.

That has led to repeated and widespread crop failures in a region that is dependent on agriculture, prompting a growing tide of farmers to migrate to nearby cities.

Women and children often bear the brunt of water shortages – from domestic violence as tensions rise in water-short homes to missed school days and child marriage, according to local water conservation experts.

In rural India, collecting water is primarily a woman’s job.

It is common to find veiled women, carrying up to four pots – some balanced on their heads – walking miles with their children to fetch water several times a day.

With their vision obstructed, there are times they trip and drop their pots, forcing them to go back for refills.

“We used to get so tired fetching water,” said Tara, a Saheli in Manpur village who goes by one name.

“Sometimes we would say ‘Ok, we didn’t wash our clothes today, we will do it tomorrow’ or ‘I didn’t bathe today, maybe tomorrow’. That’s how bad it was,” she said.

But things have changed since 2016 after Tara and two other Sahelis talked about the need for water conservation in their village and gathered dozens of people to revive their community pond and wells, and install new hand pumps.

Now washing dishes, cooking, mopping, doing the laundry, bathing, farming and taking care of livestock have become much easier, said Geeta, another Saheli who goes by one name.

“Because they interact so closely with their natural surroundings and they know what kind of problems they face in day-to-day life … they come up with solutions and adaptation mechanisms based on their knowledge,” she said.

For many women, it hasn’t been easy to become Jal Sahelis in a male-dominated, conservative region, where age-old customs dictate a woman’s life.

“My husband got upset and asked ‘Why are you going out?’, ‘Where are you roaming around?’ … ‘You aren’t even getting paid, what is the point?’,” said Aherwal, who makes up to Rs 6,000 ($84) a month rolling traditional cigarettes at home.

“I endured all his anger, his scoldings to join this group.”

Several Sahelis said their husbands and in-laws eased up after noticing the water situation was improving – and the women weren’t cutting corners at home.

After their chores and work at home, most women can carve out only two hours a day for their Saheli work, they said.

That can involve creating a water conservation plan for their village, participating in local council talks, meeting government officials, and learning how to use tools to fix wells and hand pumps – a chore traditionally done by men.

Sanjay Singh, the secretary of Parmarth Samaj Sevi Sangathan, a grassroots charity behind the Jal Saheli programme, said the women were now more involved in household and village decisions, leading to effective change in some places.

“The index of happiness has increased (in the region),” Singh told the Thomson Reuters Foundation.

Bindrawan Lodi, a 60-year-old farmer, agreed. He said without the Sahelis’ push to revive their community pond, his Chaukheda village would have been in “a lot of trouble”.

“This place was bone dry. Now we have enough water to irrigate our crops. Drinking water is still a struggle … but this is a start,” he said.

Bundelkhand, once a region green with dense forests and fields, is increasingly barren with little ground water.

Although civil society and government agencies have ramped up water conservation efforts, Singh warned much more needed to be done before the ‘dangerous’ effects of climate change exacerbate problems of unemployment, malnutrition and migration.

Two in five people in rural Bundelkhand have become urban migrants over the last decade, according to estimates by activists from the Bundelkhand Water Forum, a coalition of local organisations.

That is one of the reasons, the Sahelis say, they work so hard. They want to ensure their children can stay put and their daughters or daughters-in-law can live a life free of water worries.

“We see ads on TV that show water flowing from taps, from showers and think ‘Wow, we should move to the city’. But that is a false dream, at least for people like us who have no money. So it is better to make changes here,” said Aherwal.

“Our village will become beautiful in the next five years. All you will see is water everywhere.”