We Are All ‘Hairy Baboons’: Kashmiris 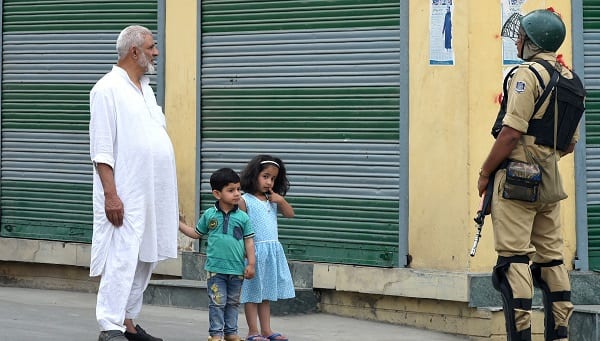 “My shop has largely remained shut from the day the restrictions were first imposed. I opened it last week to do some cleaning, but not for business. The entire market is closed. There’s no word from anyone, no communication,” said hairstylist Wajid, who runs a salon in Ganderbal (Photo: TAUSEEF MUSTAFA/AFP/Getty Images).

SPORTING a beard may be a growing fashion statement, but for many Kashmiris it has become a sheer compulsion, and to some, a great deal of consternation.

Reeling under strict restrictions with no access to communication since August 5 when the Indian government announced its decision to end Jammu and Kashmir’s special status under Article 370 and bifurcate the state into two union territories, the people in the Valley have been facing a hair-raising challenge of finding a hairdresser to have their unkempt beards trimmed and unruly locks chopped.

“I have never looked so dishevelled. I haven’t had a hair cut for nearly two months now. It is hard to find a barber. They have either fled en masse or are too scared to open their shops,” Shafat Ahmed, a government employee from district Kupwara, told over phone.

“I have a date with my girlfriend next week, but I think I may have to cancel it. She doesn’t quite like the bearded look and hates long matted hair. She considers it uncouth,” said Javid Reshi, a journalism student from Ganderbal district.

In Kashmir, a majority of the salons are run by people who are from outside the Valley, mostly from Uttar Pradesh and Bihar.

Almost every major town and city in the Valley has salons run by the non-natives.

These expert hairdressers have become synonymous with the latest hairstyles and fashion trends and have rendered local barbers almost redundant.

According to Kashmir Hairdressers Association, at least 20,000 shops run by barbers from outside Kashmir have been shut as they fled the Valley post-August 5.

“My shop has largely remained shut from the day the restrictions were first imposed. I opened it last week to do some cleaning, but not for business. The entire market is closed. There’s no word from anyone, no communication,” said hairstylist Wajid, who runs a salon in Ganderbal.

The restrictions were first imposed across Kashmir on August 5 and since then normal life remains severely affected due to shut down in the Valley which entered its 40th day on Friday.

Most of the top-level and second-rung separatist politicians have been taken into preventive custody while mainstream leaders, including three former chief ministers – Farooq Abdullah, Omar Abdullah and Mehbooba Mufti – have also been either detained or placed under house arrest.

Omar, the clean-shaven National Conference vice-president who is being held inside Hari Niwas, the last palace built by the last Dogra Maharaja Hari Singh around 1947, has also grown “an unkempt beard”, his family members said recently.

According to the family members who were allowed to meet him for the first time early this month, Omar, 49, looked unrecognisable at first glance and was sporting an “untrimmed white beard”.

“Beard doesn’t lend any dignity to my face. Plus, I have these white strands that are begging for dyeing… It is hard to find a well-trimmed clean-shaven man on the streets. We are all Hairy Baboons here,” said Khazir Mohammad, a government teacher.

“I wonder what will happen if the schools open tomorrow. It would be a nightmare both for the teachers as well as students,” he said.