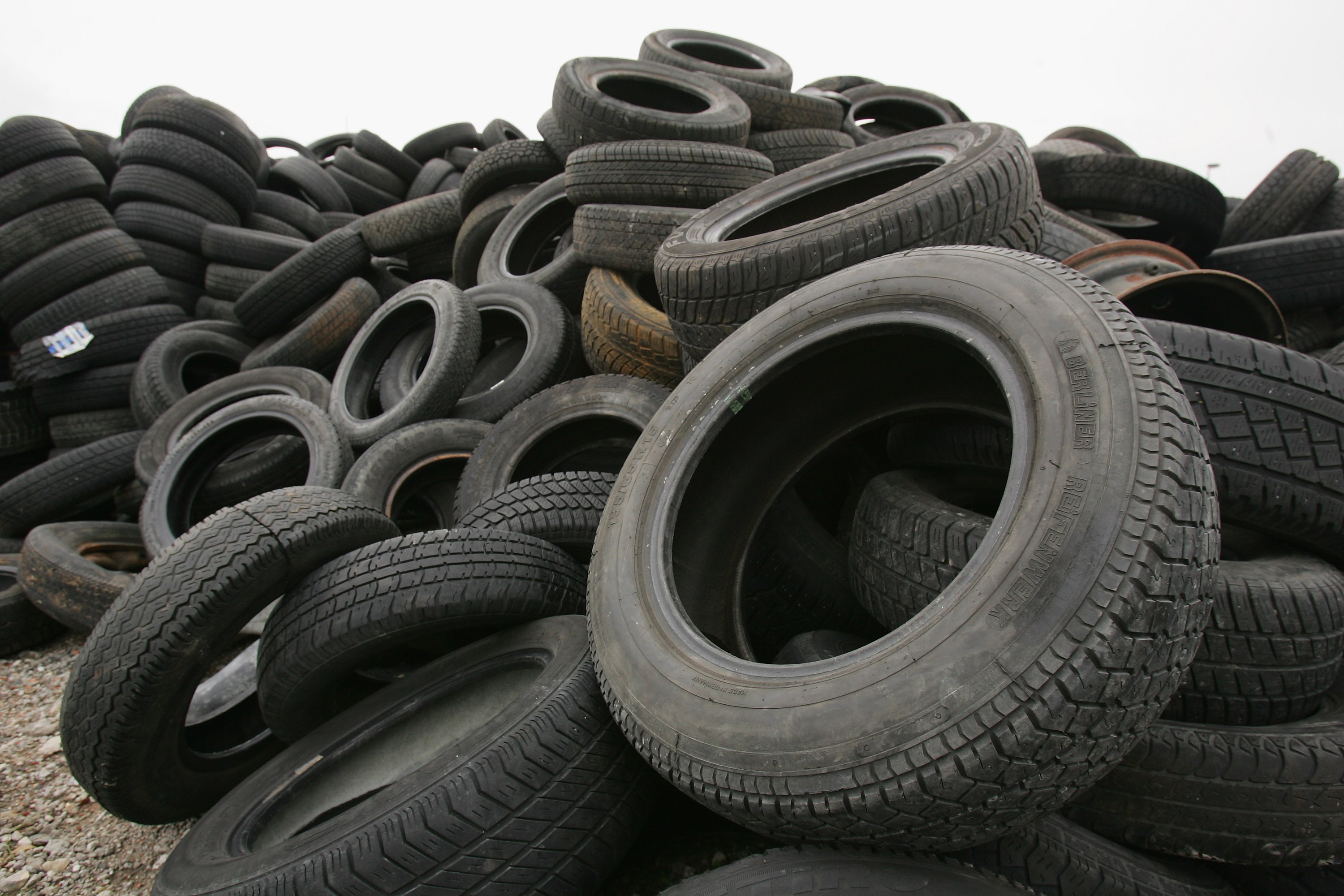 Britain is currently the largest exporter, followed by Italy and the US. India is by far the biggest buyer, accounting for 32 per cent of global imports last year, up from seven per cent five years ago, the UN data shows (Photo: Sean Gallup/Getty Images).

WHEN night falls in the Indian village of Nabipur, the backyard furnaces come to life, burning waste tyres from the West, making the air thick with acrid smoke and the soil black with soot.

Not long ago, Nabipur was a quiet farming village in northern India. Now the village is home to at least a dozen furnaces burning a steady stream of tyres to make low-quality oil in a process known as pyrolysis.

Global trade in waste tyres has almost doubled in the past five years, mainly to developing countries like India and Malaysia, according to customs data provided to the United Nations.

Britain is currently the largest exporter, followed by Italy and the US. India is by far the biggest buyer, accounting for 32 per cent of global imports last year, up from seven per cent five years ago, the UN data shows.

Many of the tyres are sent to recycling operations that comply with emissions and waste disposal regulations. But there is also a vast trade to backyard pyrolysis operations that do not, according to local authorities.

In May, it was revealed that a mass poisoning in southern Malaysia had links to companies engaged in pyrolysis.

Using unpublished customs data and interviews with dozens of industry sources, it is documented a growing international trade in waste tyres that pollute the communities that host them, according to local authorities and health experts.

The trade has also been fed by ravenous fuel demand for industrial furnaces in countries like India, the emergence of inexpensive Chinese pyrolysis equipment, and weak regulations worldwide.

Tyres are not defined as hazardous under the Basel Convention, which governs trade in dangerous waste, meaning there are few restrictions on trading them internationally unless specified by the importing country.

In most countries, including China and the US, the majority of scrap tyres are handled domestically and dumped in landfills, recycled or used as fuel in factories producing products like cement and paper.

Pyrolysis supporters say the process can be a relatively clean way of disposing of tyres and turning them into useful fuel. However, controlling emissions and processing waste residue from the burning of a product that is made up a wide range of chemicals, and synthetic and natural rubber is expensive and difficult to make profitable on a mass scale.

State-of-the-art plants can cost tens of millions of dollars, whereas basic Chinese-made pyrolysis equipment is available from online retailers for as little as $30,000.

An Indian government audit found that as of July 2019 there were 637 licensed pyrolysis plants countrywide, of which 270 were not complying with environmental standards and 116 had been shut down.

Pyrolysis plants have mushroomed in the southern Malaysian state of Johor over the last decade, industry sources said, where they supply fuel for ships.

At one plant visited near the Johor town of Kulai, Bangladeshi immigrants covered in carbon dust shovelled tyres imported from Australia and Singapore into a Chinese-made furnace. They lived onsite in a hut next to the kilns.

“People don’t know where old tyres go,” said the owner, who gave his name only as Sam. “But if my factory doesn’t exist, where will the tyres go?” He said he had a license to operate.

The environmental impact of pyrolysis in places like India and Malaysia is making some exporting countries take notice.

Australia, a major exporter of tyres to Southeast Asia and India, said in August it would ban waste exports, including tyres, although it did not give a timeline.

Australia was “aware of allegations of unsustainable processing of waste tyres in some importing countries” and did not want “to be part of such practices”, said a spokesman for Trevor Evans, the official who oversees waste reduction.

He said the short-term effects for those exposed to smoke from burning tires included skin irritation and lung infections and that prolonged exposure could result in heart attacks and lung cancer.

Other government bodies worldwide, including the US Environmental Protection Agency, have made similar conclusions. In a 1997 report, the EPA said emissions from burning tires included dioxins, sulphur oxides and a range of metals including mercury and arsenic.

Many of the tyres that end up in Indian villages like Nabipur start their lives in Britain. Indian waste tyre imports from Britain alone in 2018 amounted to 263,000 tonnes – 13 per cent of the total volume of tyres traded worldwide – compared with 48,000 tonnes in 2013.

Most European countries require tyre manufacturers and suppliers to organise tyre collection and treatment, meaning there are more home-grown recycling operations. There are no such requirements in Britain, however, which means that small firms can easily obtain licenses to collect waste tyres and sell them abroad.

Britain’s Department for Environment, Food and Rural Affairs (DEFRA) said it fully implements the rules of the Basel Convention but needs to do more about waste tyres. DEFRA said it planned to make producers more responsible for old tyres, as well as increase monitoring of shipments.

Once in India, the tyres are dispersed between recyclers who shred them for use in road-building or sports fields, firms that burn them as cheap fuel to make cement or bricks, and legal and illegal pyrolysis plants, importers and exporters said.

Faced with a growing backlash from environmental groups and residents living near pyrolysis plants, India is considering banning all but the most sophisticated operations. The country’s environmental court is expected to rule on the proposed ban in January.

Six years ago, there were no pyrolysis plants in Nabipur, 70 miles south of New Delhi. Now there are 10, with most operating at night to avoid scrutiny, residents said. Visited three small plants in the village.

At one, tyres embossed with ‘Made in Germany’ and ‘Made in USA.’ lay strewn on the floor and thick sludge seeped from pipes protruding from incineration drums. Most tyres used for vehicles in India are made domestically.

Workers wore no safety equipment, and their skin and clothes were covered in black soot. The owner, Pankaj, said a trader sells him tyres imported from abroad.

Villagers said they have suffered from breathing difficulties and eye and throat infections since the plants began expanding, and farmers had found black dust in their soil.

The reporter could not independently verify the claims. It was also not possible to verify if the operations were licenced.

“Used tyres are not available locally, so they import from abroad,” said Shiva Choudhary, a businessman who leases out construction equipment in Nabipur.

“They clean their own country and dump their garbage on us.”