What Your Family Did For Tribals? Amit Shah Asks Rahul Gandhi 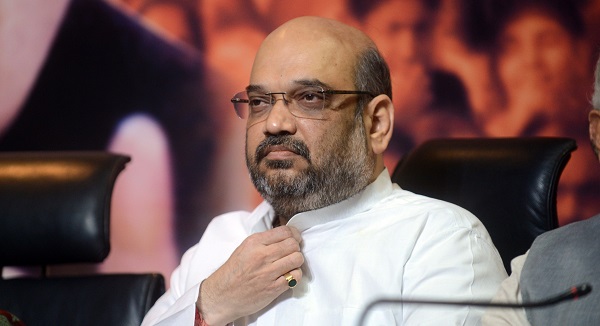 Addressing a poll rally at Aheri in Gadchiroli district, Shah, also the BJP chief, said the Modi government did more works for the adivasis than the previous Congress and NCP governments at the Centre and in Maharashtra (Photo: RAVEENDRAN/AFP/Getty Images).

ATTACKING the Congress, Union Home Minister Amit Shah on Friday asked its leader Rahul Gandhi what four generations of his family did for adivasis during their 70-year rule in the country and stressed the region will be free of Naxalism in the next five years.

Addressing a poll rally at Aheri in Gadchiroli district, Shah, also the BJP chief, said the Modi government did more works for the adivasis than the previous Congress and NCP governments at the Centre and in Maharashtra.

Shah reiterated the Congress did not scrap Article 370- which he said caused spread of terrorism and subsequent killing of 40,000 people in Jammu and Kashmir for seven decades due to vote-bank politics, but it was Prime Minister Narendra Modi who took the initiative to revoke the provision.

The Union minister lambasted the Congress and NCP for asking what was the link between the Maharashtra Assembly polls and scrapping of Article 370 and asserted Kashmir was an integral part of the country.

Targeting the Congress, Shah said past governments led by the opposition party did not give constitutional validity to the OBC commission, a task eventually completed by the Modi dispensation.

“I want to ask Rahul Baba (Gandhi), your four generations ruled the country for 70 years. What you did for the adivasis? You gave only five years to Modi ji and we have done several works for the community during the period,” Shah said.

Listing the works carried out by the BJP-led central and state governments, Shah said that in Gadchiroli alone they have built 1,30000 toilets, provided 48,000 gas cylinders, supplied electricity to 48,000 adivasis households and gave homes to 8,000 poor tribals.

He challenged 78-year-old Pawar for a debate with the BJP’s Yuva Morcha (the party’s youth wing) wing president on the issue of what their respective governments did.

“Our five-year performance will prove be better than your 50 years (of governments). We are ready for discussion,” he added.

Noting that Gadchiroli is a Naxal-hit district, Shah said earlier it was propagated that lack of development was the main cause of Naxalism.

However, in reality, Maoists were opposed to growth, the home minister said.

Shah said the government wants to provide electricity, good roads, rail services and other facilities in Naxal-hit areas, but the rebels do not want this to happen.

“Nobody needs to worry, Modi ji has curbed Naxalism over the past five years. We will free this entire region of Naxalism and create such atmosphere that the youngsters from here will be able to compete with the youth from rest of the world,” he added.

Shah said Modi secured the country and hailed him for scrapping Article 370, which gave special status to Jammu and Kashmir. He alleged the Congress was not ready to scrap the Article due to vote bank politics.

“But Modi ji did it in the first session after winning over 300 seats (in the 2019 Lok Sabha polls). And now Kashmir is linked with India forever, is on the way of development and the process of eradicating terrorism has begun,” he said.

Shah also hit out at the Congress and NCP for asking what is the link between Maharashtra and Kashmir.

“Rahul Baba read history, this is the land of Shivaji Maharaj and Savarkar. The sons of this land never hesitated in the protecting this country,” Shah said.

He asked the people to decide whether they want to be with those who removed Article 370 or with those who wanted continuation of the controversial provision.

Friday is the penultimate day of campaigning in Maharashtra, which will have a single phase polling on October 21 to elect a new 288-member assembly.  Results will be announced on October 24.