With Ball, Junior Tendulkar Helps England Ahead Of Australia Clash 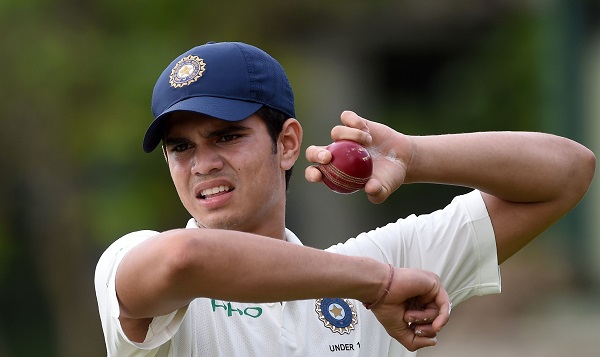 Aiming to live up to his illustrious surname, Arjun Tendulkar ran in fast and bowled at the England batsmen on the eve of their big-ticket clash against arch-rivals Australia (Photo: ISHARA S. KODIKARA/AFP/Getty Images).

TENDULKAR helped England ahead of their World Cup clash against Australia not the man who owns almost all the batting records but the boy who aspires to shine with the ball.

Aiming to live up to his illustrious surname, Arjun Tendulkar ran in fast and bowled at the England batsmen on the eve of their big-ticket clash against arch-rivals Australia.

The son of batting legend Sachin Tendulkar Monday marked his run-up at the Lord’s nets during England’s practice session, drawing, on expected lines, the attention of those present at the mecca of cricket.

Sporting an orange t-shirt, Arjun could be seen bowling to England batsmen under the watchful eyes of the team’s spin bowling consultant, Saqlain Mushtaq.

This is not the first time that Arjun has bowled in the nets for England. In 2015, as a 15-year-old, he was part of the group of net bowlers which helped England prepare for the second Ashes Test against Australia.

Bowling from over the wicket, he produced a beauty of a delivery to castle opener Nathan Tilley in just his second over.

He has represented India under-19 team against Sri Lanka in a youth Test last year. Last month, Arjun had participated in Mumbai T20 League, playing for Aakash Tigers.

The strapping youngster had taken 19 wickets in just five games for Mumbai Under-19 in the 2017-18 Cooch Behar Trophy.

Along with India, hosts England and defending champions Australia are among the favourites to win the ongoing edition of the showpiece.