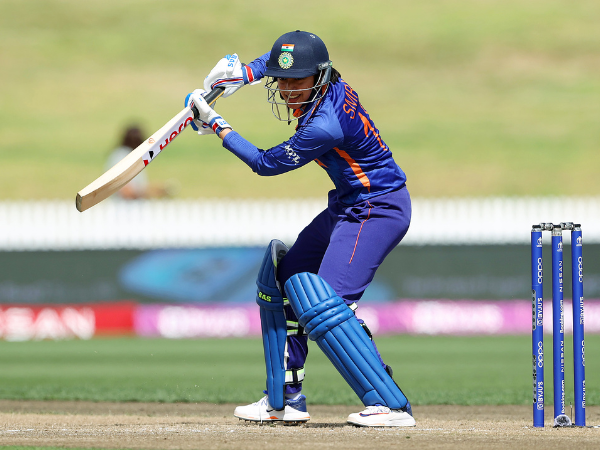 It was a poor day for Sri Lanka’s batting and bowling unit as they could not do a lot with the bat on a difficult surface and despite their bowlers gave major breakthroughs in the second T20I. With this win, India clinched the series 2-0 with a comprehensive win over Sri Lanka in the three-match T20I series. The visitors were great despite struggling a bit against Lanka bowlers at the start.

For India, Mandhana (39) and Kaur (31) were high scorers. While for Sri Lanka Inoka Ranaweera and Oshadi Ranasinghe bagged two wickets each respectively.

Chasing 126, India got off to a flying start as they gathered 20 runs in three overs without losing a wicket. In the fourth over of the innings, India lost their aggressive batter Shafali Verma as she tried to pull a shot on the delivery of Oshadi Ranasinghe, but ended up handing a catch to Kavisha Dilhari.

The next over India played aggressively as they slammed three-fours. In the sixth over Sabbhineni Meghana was dismissed by Sugandika Kumari after scoring 17 runs in 10 balls. Kumari’s wicket brought captain Harmanpreet Kaur to the crease to stitch up a needed partnership with opener Smriti Mandhana.

The duo played aggressively yet steadily to help their team go beyond half of the target in just 10 overs. Trying to play a big shot Mandhana was stumped by Anushka Sanjeewani on the delivery of Inoka Ranaweera.

This wicket brought Jemimah Rodrigues to the crease. After the 12 overs, India needed 35 runs in 48 balls. But Rodrigues could not stand long as she followed Mandhana back into the pavilion.

Yastika Bhatia the new batter came to the crease. After the 16 overs visitors needed 19 runs in 24 balls to clinch the series. SL brought back Inoka Ranaweera into the attack and she delivered a fiery spell, conceding just 4 runs not letting visitors play big shots.

Oshadi Ranasinghe the removed Yastika, who smashed 13 runs in 18 deliveries. In the last over India needed 3 runs to win the series and the match. And the very first ball of the last over saw Harmanpreet smash a blistering four which guided India to a five wickets victory over Sri Lanka.

Earlier, Batting first, Sri Lanka got off a good start. Openers Vishmi Gunaratne and Chamari Athapaththu were dealing in boundaries. India offered a good mix of spin with Deepti Sharma and Radha Yadav and pace with Renuka Singh and Simran Bahadur but it bore little fruit and zero wickets.

The duo kept on piling runs, Indian bowlers had no answers for their batting as they struggled for a breakthrough. Medium-pacer Pooja Vastrakar finally got a breakthrough in the 14th over, dismissing captain Athapaththu for 43 off 41 with assistance from the safe hands of Radha Yadav, breaking the 87-run opening stand.

This brought Kavisha Dilhari to the crease. Spinner Deepti Sharma clinched another wicket, dismissing Harshitha Samarawickrama for 9 runs. She followed it with the scalp of Nilakshi de Silva for just 1, trapping her LBW.

Oshadi Ranasinghe was the next one to go for Sri Lanka, trapped by Radha Yadav for 5. Renuka Singh took wicket of Dilhari for just 2. SL innings concluded on a terrible note as tight bowling from India and reckless batting by SL in the second half restricted the hosts to 125/7 in 20 overs with Anushka Sanjeewani (6*) and Sugandika Kumari (1*)
Deepti Sharma was the pick of the bowlers with 2/34. Singh, Yadav, Vastrakar and Kaur also took a wicket each.