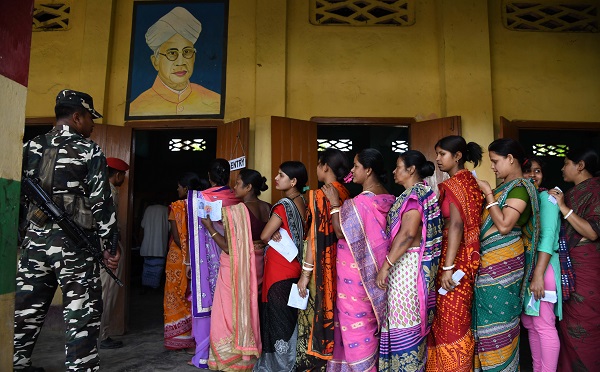 Indian voters stand in queue to cast their ballot at a polling station in the northeastern Indian state of Assam. (Photo: BIJU BORO/AFP/Getty Images)

Tens of millions of Indians joined nationwide queues Thursday (11) to give their verdict on prime minister Narendra Modi as the world’s biggest election started amid deadly clashes.

Election officials reported a heavy turnout across the 20 states taking part in the first day of the massive exercise which involves 900 million eligible voters and will take nearly six weeks to complete.

While the 68-year-old Modi remains popular because of his tough stance on national security, he is under pressure over unemployment and controversial economic measures.

Insults and fake news have surged on social media in the run-up to the poll as Modi’s Bharatiya Janatha Party (BJP) and the opposition Congress party stake their claims.

On the ground, security forces were on high alert and two members of regional parties were killed in clashes outside a polling station in Tadipatri, Andhras Pradesh state, media reports said.

After five people including a local lawmaker were killed by a roadside bomb planted by suspected Maoist rebels this week, the insurgents were blamed for two voting day blasts in Chhatisgarh and Maharashtra states.

Tens of thousands of armed police, paramilitaries and troops guarded polling stations in Jammu and Kashmir which is in the grip of an insurrection that took India to the verge of a new war with neighbouring Pakistan less than two months ago.

Thousands of parties and candidates are running for office in the seven separate days of voting in 543 constituencies up to May 19. Final results will be released on May 23.

Some 1.1 million electronic voting machines are being taken around the country for the votes, with some transported through jungles and carried up mountains, including to a hamlet near the Chinese border with just one voter.

About 142 million people were eligible for the first day of voting.

Polling stations in northeastern states like Arunachal Pradesh bordering China were the first to open, followed by parts of Bihar in the north.

In Assam in the northeast, queues started forming well before voting began, including many of the 84 million first-time voters who could play a decisive role in the outcome.

“It’s a great feeling to cast the vote, which makes me a part of the democratic system and makes me responsible for electing a good leader,” Anurag Baruah, 23, said.

Modi appealed in an early-morning tweet to his 46.8 million followers to “turn out in record numbers.

He swept to power in 2014 with the biggest landslide in 30 years.

Modi has simplified the tax code and made doing business easier, but some promises have fallen short. Thousands of indebted farmers have committed suicide in recent years.

Growth in Asia’s third-biggest economy has been too slow to provide jobs for the roughly one million Indians entering the labour market each month.

“I want a government that thinks about women and brings down the high prices of rice and lentils,” Suman Sharman, 50, a housewife in Ghaziabad, said.

Rahul Gandhi, leader of the opposition Congress party and the latest member of his family dynasty hoping to become prime minister, accused Modi of causing a “national disaster”.

“You vote today for the soul of India. For her future. Vote wisely.”

His party won three key state elections in December but India’s showdown with Pakistan in February has give Modi’s standing a boost.

Gandhi, great-grandson, grandson and son of three past premiers, has grown in stature since being derided in leaked US diplomatic cables in 2007 as an “empty suit”.

But Modi and the BJP’s campaign juggernaut he has been addressing three rallies a day in the run-up to voting will be no pushover, promising a $1.4-trillion infrastructure blitz.

India’s latest military altercation with Pakistan in February has allowed Modi to portray himself as the nation’s ‘chowkidar’ (watchman).

“Nationalism is our inspiration and inclusion and good governance is our mantra,” Modi, said at the launch of his manifesto.

The few opinion polls have given him the advantage but they are notoriously unreliable in India and much will depend on the BJP’s performance in key states such as Uttar Pradesh and West Bengal.

“It reminds me of 2004 when (premier Atal Bihari) Vajpayee and the BJP lost when everyone expected them to win,” he said.