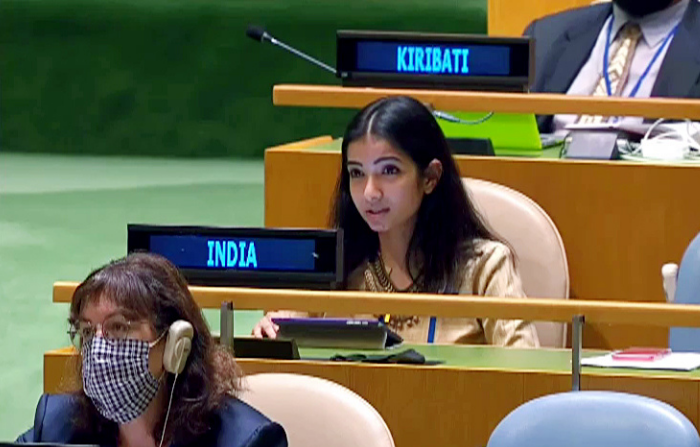 ARCH-RIVALS India and Pakistan on Friday (24) clashed at the United Nations after Pakistani prime minister Imran Khan accused New Delhi of a “reign of terror” on Muslims, which saw a young Indian woman diplomat fiercely hitting back at him.

Her response came after Khan launched a scathing attack on India in which he accused his Indian counterpart Narendra Modi of planning to “purge India of Muslims” at the 76th session of the UN General Assembly which is currently underway.

“The worst and most pervasive form of Islamophobia now rules India,” the Pakistani prime minister said in a virtual address due to Covid precautions.

“The hate-filled Hindutva ideology, propagated by the fascist RSS-BJP regime, has unleashed a reign of fear and violence against India’s 200 million-strong Muslim community,” the 68-year-old leader said.

The BJP is Modi’s ruling Bharatiya Janata Party and the RSS )Rashtriya Swayamsevak Sangh) is its ideological mentor and a Hindu right-wing outfit.

Khan’s words came the same day when Modi visited the White House and met US president Joe Biden, who the Pakistani prime minister is yet to speak to. He said commercial interests with billion-plus India were allowing it to “get away with human rights abuses with complete impunity”.

‘An arsonist disguising itself as a firefight’

For India, a young woman diplomat chose to take Khan on. Sneha Dubey, a first secretary at India’s UN mission, counter accused Pakistan of sheltering and glorifying al-Qaeda mastermind Osama bin Laden who was killed by US special forces in a 2011 raid in the Pakistani city of Abbottabad.

“This is the country which is an arsonist disguising itself as a firefight,” Dubey, a 2012-batch officer who has studied in Goa and Delhi in India.

“Pakistan nurtures terrorists in their backyard in the hope that they will only harm their neighbors,” she said, highlighting violence against minorities in Pakistan as well as its “religious and cultural genocide” in 1971 as Bangladesh (formerly East Pakistan) won independence the same year.

“Unlike Pakistan, India is a pluralistic democracy with a substantial population of minorities who have gone on to hold highest offices in the country,” she said.

The Indian diplomat’s reply triggered a response from the Pakistani side as one of its diplomats — Saima Saleem — took issue with Dubey’s contention that Kashmir, a part of which is under Pakistan’s occupation, is an internal issue.