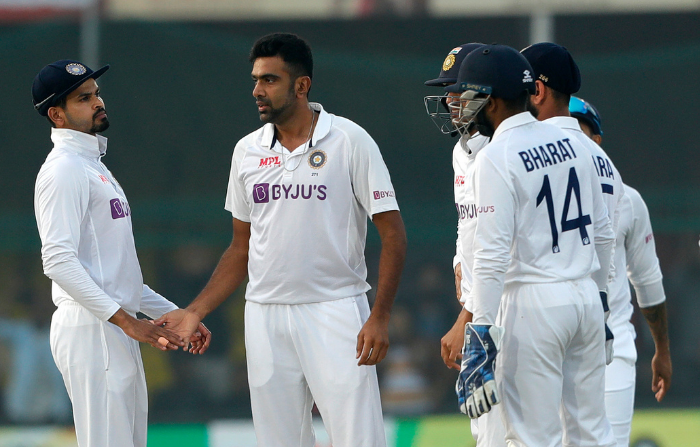 Ravichandran Ashwin and other Indian cricketers on Day 5 of the first Test against new Zealand at Green Park in Kanpur on November 29, 2021. (ANI Photo)

INDIA supporters were left with a disappointed heart at the end of the first Test against New Zealand at Green Park in Kanpur on Monday (29) as the visitors survived the day by the barest of margins to keep the series alive.

Requiring 280 runs to win on the final day with nine wickets in hand, Kane Williamson’s side were 125 for 3 in the 64th over when India orchestrated a mini slide to leave them at 128 for 6 with captain Williamson (24) getting dismissed.

ALSO READ: Will Rahane or Pujara face the axe when Kohli returns in Mumbai?

However, the lower order of the Test world champions showed a gritty resistance to survive another 34 overs and finished the day at 165 for 9, leaving the home side frustrated. Debutant Rachin Ravindra remained not out on 18 off 91 balls while No.11 Ajaz Patel played 23 balls for unbeaten two to see their team through. The duo, both of whom have birth connections to India, resisted the Indian bowlers for almost nine overs, prevailing over the spinners who took eight of the nine wickets that fell.

Earlier in the day, New Zealand resumed from their overnight score of four for one and saw surviving opener Tom Latham (52) and nightwatchman Will Sommerville (36) adding 76 runs for the second wicket before pacer Umesh Yadav broke the partnership.

Debutant Shreyas Iyer, who scored 105 and 65 in two innings, was adjudged the player of the match.

The second Test begins in Mumbai on December 3.

Harbhajan congratulates Ashwin for overtaking him

India spinner Harbhajan Singh congratulated Ashwin over the latter surpassing him to become the third highest wicket-taker for India in the long format.
Ashwin took the wicket of Latham on Day 5 of the Test match in Kanpur to overtake Singh’s tally of 417 wickets.

Ashwin equalled Singh’s tally on Sunday (28) when he dismissed opener Will Young.

Ashwin has taken 23 matches and 40 innings less than Harbhajan to break the latter’s record.