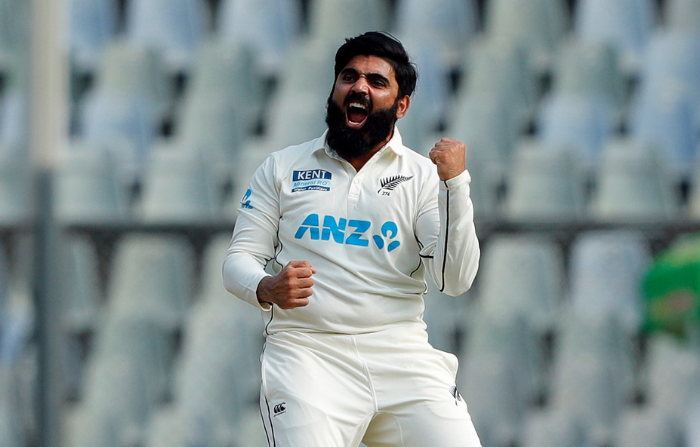 New Zealand spinner Ajaz Patel celebrates the dismissal of India’s Mohammed Siraj, who was his 10th wicket of the innings, in the second Test at the Wankhede Stadium in Mumbai. (ANI Photo)

NEW ZEALAND spinner Ajaz Patel on Saturday (4) became only the third bowler in the 144-year history of Test cricket to claim all 10 wickets in an innings. The 33-year-old left-arm bowler, who was playing in just his 11th Test and has taken 29 wickets before the second Test match against India in Mumbai, joined the elite club of England off-spinner Jim Laker and India leg-spinner Anil Kumble by accomplishing the feat.

It may be mentioned here that Patel was born in Mumbai and emigrated to New Zealand in 1996.

Kumble, who achieved the feat against Pakistan in Delhi in 1999, tweeted to congratulate the Kiwi spinner saying, “Welcome to the club #AjazPatel #Perfect10. Well bowled! A special effort to achieve it on day one and two of a test match.”

Welcome to the club #AjazPatel #Perfect10 Well bowled! A special effort to achieve it on Day1 & 2 of a test match. #INDvzNZ

Laker accomplished his feat against Australia in Manchester in 1956.

Patel was the only New Zealand bowler to pick wickets for New Zealand on Day 1 of the Test in Wankhede after India captain Virat Kohli won the toss and elected to bat. He came back on the second day to add six more to his tally to end up with the figures of 10 for 119 in 47.5 overs. India finished at 325 in their first innings.

Patel, who started his career as a fast bowler, extracted sharp turn and bounce from the pitch to make inroads into the Indian innings. He picked top Indian batting duo Cheteshwar Pujara and Kohli for nought before opener Mayank Agarwal’s century put India back in command.

However, the Kiwis, who are yet to win a Test series in India, faced a disaster after coming out to bat as they were dismissed for only 62 runs with Ravichandran Ashwin taking four wickets, Mohammed Siraj three and Axar Patel a couple.