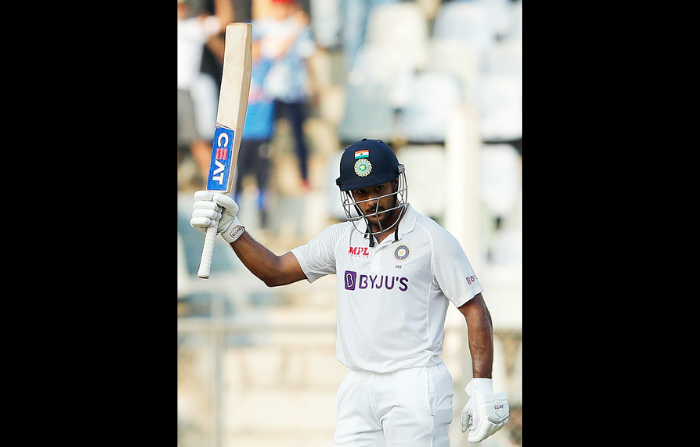 Mayank Agarwal raises his bat after reaching a milestone on Day 1 of the second Test match against New Zealand at the Wankhede Stadium in Mumbai, India. (ANI Photo)

THE first day of the second Test match between India and New Zealand at the Wankhede Stadium in Mumbai turned out to be an engaging one as both sides locked horns over a see-saw battle. The visitors pegged the hosts back after Virat Kohli’s side got a good start after he won the toss and elected to bat but the home team did well in the later part of the day to not lose the momentum. While Mayank Agarwal hit back form with a superb unbeaten ton (120)  — his third in the long format — Kiwi spinner Ajaz Patel claimed all the wickets that fell on the day.

India-born Patel engineered a mini collapse in India’s middle order after Agarwal and Shubman Gill (44) gave them a solid start. From 80 for no loss, India slumped to 80 for 3 with Gill, Cheteshwar Pujara (0) and Kohli (0) going back into the hut in quick time. Patel then added the one of Shreyas Iyer (18), the centurion and player of the match in Kanpur.

New Zealand opening pacers Tim Southee and Kyle Jamieson also bowled well but it was Patel who had an impressive day out on the ground.

For India, Agarwal stood like a rock at one end after the fall of Kohli, he added 80 runs with Iyer and after the latter got dismissed, he added another unbeaten 61 runs with wicket-keeper-batter Wriddhiman Saha who was batting on 25 at stumps. India ended the day at 221 for 4.

The first match was drawn after New Zealand’s last pair Rachin Rathindra and Patel resisted the Indian bowlers for nearly 10 overs on Day 5.