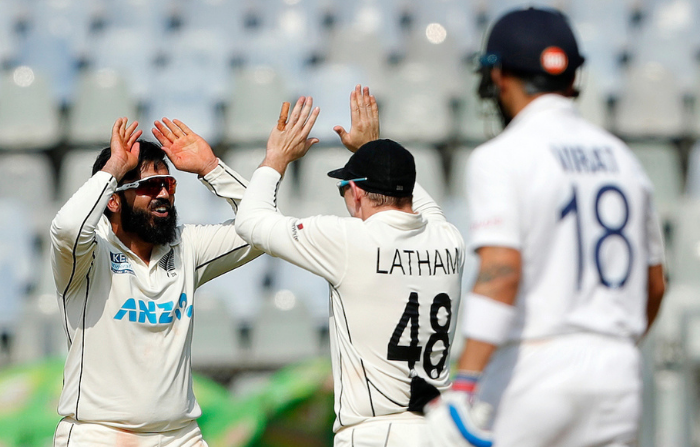 New Zealand players celebrate the dismissal of India captain Virat Kohli on the first day of the second Test match at Wankhede Stadium, in Mumbai, India, on December 3, 2021. (ANI Photo)

INDIA captain Virat Kohli had a disappointing return to international cricket on Friday (3) when he fell for no score against New Zealand spinner Ajaz Patel in the first innings of the second Test in Mumbai but the decision sparked an outrage because of the inconclusive evidence.

It all happened in the 30th over of the innings when Kohli came out in place of Cheteshwar Pujara with India at 80 for 2. He was trapped in front of the wickets by Patel and was adjudged out by the umpire. The ace batter then opted for the Decision Review System and the replay showed a spike but it could not be established whether the ball hit Kohli’s bat first or the pad.

The on-field verdict stayed since there was no strong evidence to overturn it and Kohli had to make a long way back.

The controversial dismissal triggered a debate on social media and former England captain Michael Vaughan, who is a commentator now, said it was “not out”.

“Not Out,” he tweeted reacting to the video of the dismissal of Kohli.

Earlier in the day, Kohli won the toss and elected to bat and the hosts ended the day at 221 for 4 with opener Mayank Agarwal remaining unbeaten on 120 with wicket-keeper-batter Wriddhiman Saha on 25 not out.

For New Zealand who are being led in the match by Tom Latham instead of Kane Williamson who has been injured.