5 Top Bollywood Films Of The First Half Of 2019 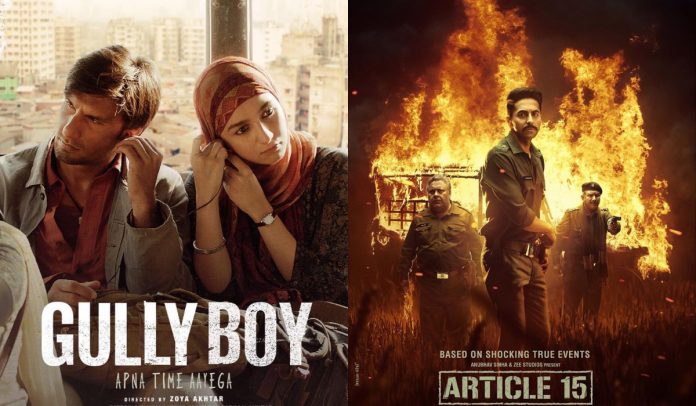 THE first six months of the year 2019 has been quite good for Bollywood as most of the biggies did quite well at the box office. However, we cannot forget that a few films that were expected to break records at the box office failed to make a mark. Just like 2018, in 2019 too content is ruling over stars.

Let’s look at the 5 top films that we witnessed on the big screen in the first half of 2019.

Uri: The Surgical Strike
Vicky Kaushal, Yami Gautam, and Kirti Kulhari starrer Uri: The Surgical Strike is undoubtedly one of the best films of the year. The movie was based on the surgical strike that the Indian army did on terrorist camps in Pakistani after the Uri attacks in 2016. The dialogue ‘How’s The Josh?, High Sir!’ has become a rage. By the way, the movie is the highest grossing film of the year to date with the collection of around Rs 245 crore at the Indian box office.

Ek Ladki Ko Dekha Toh Aisa Laga
Anil Kapoor and Sonam Kapoor came together on the big screen for the first time in Shelly Chopra’s Ek Ladki Ko Dekha Toh Aisa Laga. The movie dealt with the subject of homosexuality in a wonderful manner but looks like Indian audiences are still not ready to watch a mainstream actress playing the role of a lesbian. With such a great story and narration, ELKDTAL, unfortunately, failed to make a mark at the box office.

Gully Boy
After making movies like Luck By Chance, Zindagi Na Milegi Dobara, and Dil Dhadakne Do, Zoya Akhtar stepped out of her comfort zone and directed Gully Boy, the story of an underdog. With Gully Boy, she also introduced people to the world of rapping. It is clearly one of the best works of Zoya.

Kabir Singh
While there are too many debates happening about the content of Shahid Kapoor and Kiara Advani starrer Kabir Singh, we cannot ignore that moviegoers are loving the film. The remake of Telugu hit film Arjun Reddy, Kabir Singh has made a mark at the box office and it is already a blockbuster.

Article 15
Anubhav Sinha’s Article 15 showcases a very important issue like caste discrimination in India. Ayushmann Khurrana’s top-notch performance is one of the highlights of this social drama. The film has got amazing reviews and has taken a decent start at the box office. It will be interesting to see how it performs at the box office in the upcoming days.