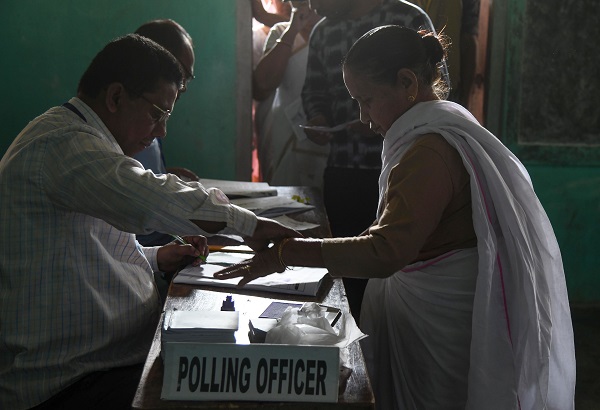 An Indian voter gives her fingerprint as she comes to cast her vote at a polling station during India’s general election in Purandudam village, some 140 km from Guwahati, the capital city of India’s northeastern state of Assam on April 11, 2019 (Photo: BIJU BORO/AFP/Getty Images).

Number Of Voters
This year, a total of 900 million people of the country’s 1.3 billion population have been listed as eligible voters.

Less than half of the total eligible voters are women, whereas 300 million voters are illiterate.

As many as 84 million first-time voters were added to the electoral roll since the last poll in 2014.

A total of one million booths will function for the smooth conduction of election process.

The voters will elect their representatives for 543 seats in the lower house of the Indian Parliament.

Election Expenditure
An exact estimate on the sum which is being spent for this year’s election hasn’t yet released. However, the total expenditure is expected to surpass all previous elections expenditure.

Election Process
The election is being conducted in seven phases which started on April 11. The election process is scheduled to conclude on May 19.

The counting of votes and the announcement of results is scheduled for May 23.

In the last general election of 2014, several hundred parties fielded over 8,000 candidates.

This year millions of electronic voting machines (EVMs) are being used in the election process. A receipt will be printed every time a voter casts a ballot, and the slips will be collected in a sealed box for free and fair elections.

Candidates, Political Parties
In India, the candidates who contest in the election often represent caste, language, region, religion, and many others which determine the voting behavior of the voters in the country.

For the first time in the election history of India, the total number of candidates was reached 13,952 in 1996.

There are close to 2,300 political parties registered in India. However, only seven parties are recognised at the national level and 59 at a state level.

However, the small parties play a vital role in the event of a hung parliament, as the main parties seek coalitions to form government.

Election Staff
An army of 10 million officers has been appointed temporally to enforce the election rules.

The election officers also have the responsibility to ensure that no voter has to travel more than two kilometres to cast his ballot.

It is difficult to provide exact number of people who are assigned to perform various election duties such as, security, transportation, and many others.