80 years on from the ‘Indian Titanic’ – it’s time to tell the story, says great-grandson of the drowned 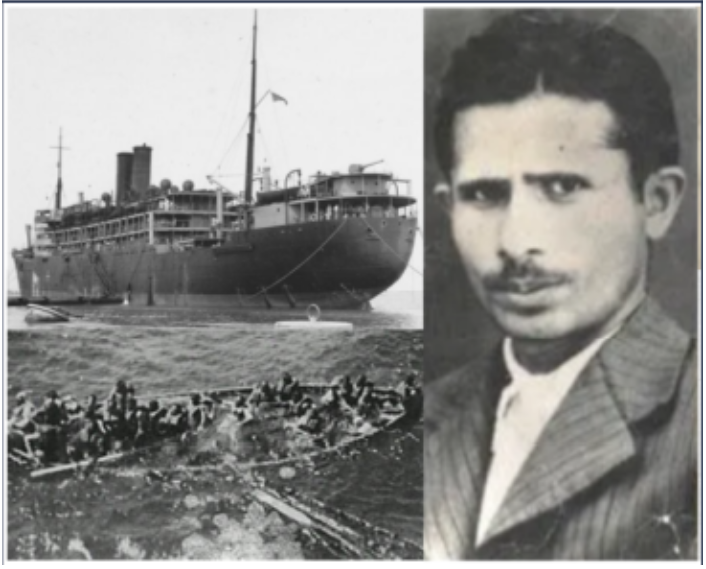 November 23, 2022 marks 80 years since the S.S. Tilawa ship was sunk in the middle of the Indian Ocean during World War 2. A commemoration has been organized on this date at the Royal Bombay Yacht Club, Mumbai, India. This will be the first time the incident is officially acknowledged, and the loss of life memorialized.

The British-built ship was traveling from Mumbai to South Africa and was sunk by the Japanese in the Indian Ocean, close to the Seychelles.

The ship contained many Indian nationals, 280 of whom lost their lives, including Mr. Nichhabhai Chibabhai Solanki. His great-grandson, Emile Solanki, now living in Toronto Canada, is encouraging further research into the S.S. Tilawa incident and wants it to gain more attention at maritime museums and similar.

In 2017 a British exploration company visited the wrecksite using a subsea vessel. It took over 6 months to find 2,364 silver bars with a value of approximately £32 million. November 23, 2022 marks the 80th anniversary since the S.S. Tilawa forgotten tragedy. A commemoration has been organized for Wednesday November 23rd at the Royal Bombay Yacht Club, Mumbai, India.

S.S. Tilawa was a passenger cargo liner sunk by the Japanese Imperial Army during World War Two. On November 20th 1942 at 17:00, the British-built ship left Mumbai for South Africa. There were 222 crew members, with 732 passengers, 9 lifeboats, and over 6,000 tons of cargo, including 60 tons of silver bullion. Its route was from Mumbai to South Africa via the Seychelles, Mombasa, and Maputo, ending in Durban. Passengers were mainly Indian nationals.

On November 23rd, in the early hours of the morning, 930 miles northeast of the Seychelles, Tilawa was attacked by the Japanese Imperial Army. The I-29 B-1 Submarine, twice torpedoed Tilawa. After the first torpedo attack, the first officer transmitted SOS messages. Unfortunately little could be done, and once the second torpedo hit the ship sank quickly. For the next 2 days, all aboard would fight for their lives, and see their fellow passengers and loved ones drown to death.

Eventually a rescue mission led by a Royal Navy Cruiser HMS Birmingham and S.S. Carthage ensured 682 people were rescued. A total of 280 lives were lost. Those rescued were taken back to Mumbai by November 27th 1942.

It was always known that 60 tons of silver bullion was onboard the ship. In 2017 a British exploration company visited the wrecksite using a subsea vessel. It took over 6 months to find 2,364 silver bars with a value of approximately £32 million. Documents reveal the Indian Government sold these silver bars to the government of South Africa during the war for the purpose of coinage. The bullion onboard S.S. Tilawa was the last of 4 consignments. This recent discovery sheds new light on this tragedy, with an opportunity to further research and increase awareness.

It is unknown why S.S. Tilawa was sunk in the Indian Ocean. Did the Japanese Imperial Army know there was bullion on the ship, or, did they see the ship as a military threat? Where was HMS Birmingham and S.S. Carthage when Tilawa was attacked? Did the British, Indian, or Japanese Governments hold any classified information, including any communication between these vessels during the attack?

It is believed S.S. Tilawa was the only passenger cargo-liner attacked in the Indian Ocean during the war. This tragedy represents the Indian immigrant story, where people endeavored to break free from poverty and village life. The continent of Africa presented new opportunities with better prospects. Few know of the incident, yet many families suffered.

Emile Solanki, now living in Toronto Canada, whose great-grandfather Mr Nichhabhai Chibabhai Solanki sadly drowned after Tilawa was torpedoed, said: “This is such a tragic story and so little has been written or researched about it. Along with my father, Mukesh Solanki, who lives in Leicester, UK, I’m hoping to raise further awareness and increase research efforts into this incident. Tilawa deserves to be prominently featured in the history books. Our website www.tilawa1942.com is a contribution towards this endeavor.

At age 9 my late grandfather Mr. Ranchhodbhai Nichhabhai Solanki lost his father to the Tilawa attack. His cousin-uncle Mr. Devjibhai Bhagabhai Solanki survived. Our grand-uncle, Mr. Vallabhbhai Chibabhai Solanki adopted my grandfather, and raised him as his own son with much love and affection.

We are always grateful for what he did on our families behalf. It is quite a thought that if my great-grandfather did not leave any surviving children, I would not be alive today. Through the years, my grandfather yearned for his father. His final wish before his death in 2013 was for the S.S.

Tilawa ship and the location of his fathers death to be found. He would have been thrilled with the ship’s discovery in 2017. This year my father and I are hosting the 80th commemoration at the Royal Bombay Yacht Club, Mumbai, India on Wednesday November 23rd. It is a fitting area since S.S. Tilawa departed from Bombay, and all survivors were brought back to the Ballard Pier. This will be the first time a commemoration has been organized to officially acknowledge the incident, and memorialize the loss of life.

Through great effort I was able to locate some other families connected to the tragedy. No doubt there are many more around the world who may have information to share.

Mr. Arvindbhai Jani age 83 living in South London is the only known survivor. He was age 3 during the Tilawa attack. His older sister Mrs. Chandraben Rawal age 86 living in South London recalls how often her late mother Mrs. Vasantben Labshankar Jani would speak of her survival account. In order to make the last lifeboat, she had to wrap her child in her sari and make the jump. It is extremely moving to know Mr. Jani was actually on the ship!

We were recently in contact with Mr. Pravin Jivan from East London, and 3 gentlemen from South Africa, Mr. Haroon Tar Mahommed, Mr. Ashraf Roomaney, and Mr. Imran Bobat. All are descendents of Tilawa survivors. Hearing their family recollections of the tragedy is a sad reminder of the trauma suffered by countless victims, and the void left even 80 years later.

A known author, Mr. Mervyn Maciel from South London now age 93 was a young lad in Bombay when his father, step-mother, and 3 step-siblings drowned after the second torpedo hit Tilawa. This tragedy had a devastating affect on Mervyn and his 2 brothers. The boys were orphaned overnight, but thanks to their grandfather they were able to build a new life. Yet even today, the thought of his family drowning at sea brings much pain to Mervyn and his family.

We are keen to speak to other potential survivors, descendants of victims, or any with information related to this tragedy. It is my personal desire that one day the story of Tilawa 1942 The Forgotten Tragedy will be featured through documentary and film. In the meantime we look forward to the 80th commemoration in Mumbai, India on Wednesday November 23rd 2022.”