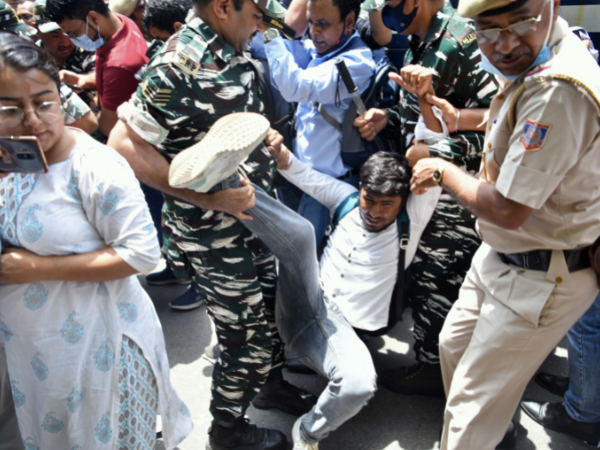 Police personnel detain a protester during a demonstration against the Narendra Modi government’s ‘Agnipath’ recruitment scheme for the armed forces on Friday, June 17, 2022. (ANI Photo)

ONE person died and four others were injured on Friday (17) when the police opened fire on protestors who were agitating against the Centre’s ‘Agnipath’ scheme, making the victim the first casualty in the wave of protests that has swept across many states against the Centre’s new recruitment policy for the armed forces.

As the agitation, which was earlier witnessed in Bihar and Uttar Pradesh spread to the South, the Railway Protection Force (RPF) resorted to firing to disperse protesters who went on the rampage at Secunderabad Railway station in the southern state of Telangana where three coaches of a train were set ablaze during the agitation. Confirming the death, a senior police official told the Press Trust of India that the firing was done by Railway Protection Force (RPF).

The injured are being treated in the state-run Gandhi Hospital. According to a senior official of South Central Railway, the agitators set on fire some coaches of three passenger trains but no passengers were hurt in the incidents. “There was an incident (of firing), to control them and some firing also happened,” the official told PTI.

Tension prevailed at Secunderabad Railway station and in the vicinity as people ran helter-skelter in the wake of the protest. Shops near the railway station were shut. TV visuals indicated that some protestors injured at the station were being shifted to hospital.

The agitators pulled out cargo from the parcel coach and dumped it on the tracks and set fire, leading to disruption of some train services. The agitators shouted slogans against the Centre demanding normal recruitment of army jobs, the SCR sources said. The agitators numbered about 300-350. Some stalls in the railway station suffered damage, they said.

The identity of the agitators was yet to be established, the said. There were widespread protests in some parts of the country on Thursday demanding the Centre to roll back ‘Agnipath’ scheme unveiled by the ministry of defence which is a pan-India merit-based recruitment scheme for enrolling soldiers, airmen and sailors. Trains were set afire, public and police vehicles attacked and personnel injured as protests over ‘Agnipath’ snowballed and swept across several states including Uttar Pradesh and Bihar on Thursday (16). Under the scheme, young persons will be provided an opportunity to serve in the armed forces as ‘Agniveer’ for a period of four years, including training period.