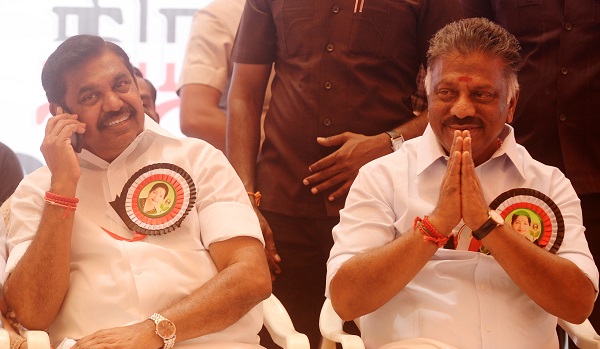 AIADMK coordinator O Panneerselvam (R) and joint coordinator K Palaniswami (L) said in a statement that agents must follow a slew of steps, including reaching the counting centres as early as 06.00 AM IST on May 23 (Photo: ARUN SANKAR/AFP/Getty Images).

South India’s regional political party, AIADMK Tuesday (21) instructed its counting agents to remain vigilant over archrival DMK’s “dishonest practices” during the counting of votes polled in the Lok Sabha elections and assembly by-polls and asked them to ensure all standard procedures were followed.

AIADMK coordinator O Panneerselvam and joint coordinator K Palaniswami said in a statement that agents must follow a slew of steps, including reaching the counting centres as early as 06.00 AM IST on May 23.

Palaniswami is Tamil Nadu chief minister while Panneerselvam is his deputy.

“The entire country knows that DMK members are experts in resorting to dishonest practices as well as violence. Many instances can be mentioned (to prove this). Therefore, (the AIADMK counting agents) should remain vigilant to see if the DMK members commit any fraud and (if so) seek readdressal by taking that up with higher officials,” they said.
Counting of votes for 38 Lok Sak Sabha seats and 22 Assembly constituencies where bypolls were held, would be done across the state in various centres on Thursday (23).

Election to the Vellore Lok Sabha seat was rescinded after recovery of huge amount of cash allegedly from an associate of a DMK leader.

The two leaders, whose party should win a sizeable number of seats from the 22, further instructed the counting agents to ensure all standard procedures were duly followed on the counting day.

These included examining the seals on EVMs, matching of votes polled and counted and double checking the number of votes every candidate has received in each round.

The agents should leave the counting centres only after votes of all rounds were counted and the results declared, they said.