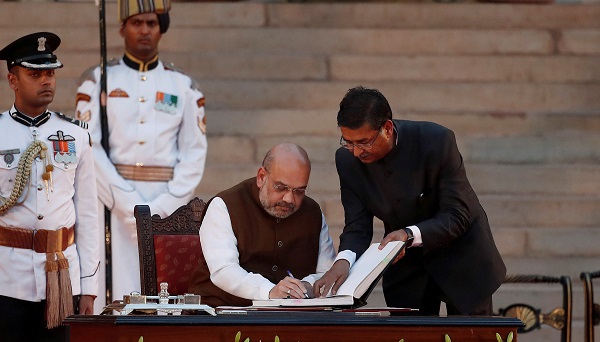 Amit Shah signs documents after taking his oath as a cabinet minister during a swearing-in ceremony at the presidential palace in New Delhi, India May 30, 2019 (Photo: REUTERS/Adnan Abidi).

AS the battle-hardened drill sergeant for prime minister Narendra Modi, Amit Shah has long been considered India’s second most-powerful person, and his appointment Friday (31) as home minister elevates his position to leader-in-waiting.

While Modi is the right-wing Bharatiya Janata Party’s (BJP) people person, firing up rallies and mastering Twitter, Shah has for years made sure that Modi’s orders are carried out to the letter while turning the world’s biggest political party into the undisputed force across the nation of 1.3 billion people.

Shah’s piercing stare and strongarm tactics have made him a feared and respected figure in the party opposition parties and critics call him “ruthless” a status only increased by his role masterminding the BJP’s second straight landslide election victory this month as the party president.

Now the 54-year-old Shah, who until this month was neither an elected lawmaker nor a government minister, will take on a more prominent, public role while remaining Modi’s most trusted lieutenant and strategist.

“Team Modi 2.0 marks a clear power-shift below the level of prime minister,” the Economic Times said in an editorial.

Few have dared in recent years to talk of a successor to the 68-year-old prime minister, but the Times added: “Shah is clearly a claimant to the top job if and when Modi moves aside.”

While Modi reigns supreme, the election “saw the emergence of Amit Shah as the heir-apparent,” said Samir Saran, president of the Observer Research Foundation think-tank in New Delhi.

“It is clear he is en-route to inheriting the mantle when the time comes,” Saran said, describing Shah as “meticulous, driven and hardworking, certainly no-nonsense and a hard task-master”.

While Shah has never been a minister at national level, he is a trained bio-chemist and was also a stockbroker and has used those skills to concoct and gamble with political campaigns.

Saran predicted that India could expect more of the same.

As home minister, Shah will be leading the BJP’s agenda in key areas such as internal security and policies that will influence sensitive relations between religious groups.

While the prime minister came from a poor family and his deputy from a wealthy business family, they followed a similar career path.

Both were raised in Gujarat state and rose through the ranks of the Rashtriya Swayamsevak Sangh (RSS), the volunteer organisation that is the ideological parent of the BJP.

After Modi became chief minister in Gujarat in 2001, Shah became his loyal home minister in charge of justice and security. They undermined the opposition Congress party in the state as they have since done on the national stage.

Shah was hardline on crime and terrorism as state minister and in the national job he will have to protect Modi’s tough guy image.

Shah said during the election campaign that a controversial national register to identify and weed out illegal migrants was a top priority.

He will take charge of the effort as the home minister.

After masterminding Modi’s first landslide national election win in 2014, the prime minister called Shah his “man-of-the-match” and made him BJP president.

The trust between them has only appeared to grow since.