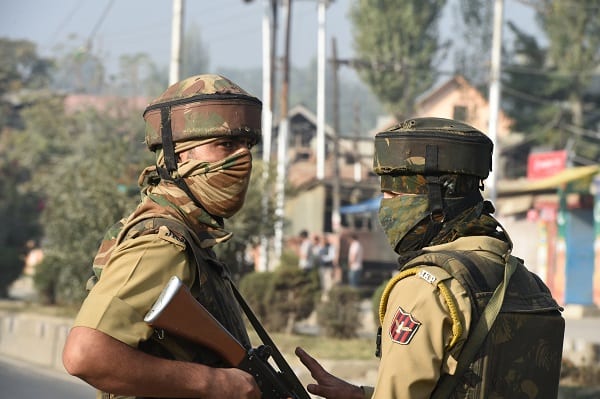 Akashdeep, one of the four arrestees whose interrogation led to the latest seizure, also accompanied a State Special Operations Cell (SSOC) team of the Punjab Police to the site from where the drone was recovered (Photo: TAUSEEF MUSTAFA/AFP/Getty Images).

INDIAN police on Friday (27) recovered a Pakistani drone which was used to airdrop arms and ammunition in border areas of Punjab, the second such seizure this week in the state, officials said.

The damaged drone was recovered in Mahawa village based on the information given by one of the four people the state police arrested on Sunday.

They are allegedly part of a terror module of the Khalistan Zindabad Force (KZF).

Earlier, the police had recovered a half-burnt drone on Tuesday from Tarn Taran. They had said it was also used to drop weapons from Pakistan to fuel unrest in Punjab and adjoining states.

Akashdeep, one of the four arrestees whose interrogation led to the latest seizure, also accompanied a State Special Operations Cell (SSOC) team of the Punjab Police to the site from where the drone was recovered.

Police officials said the drone was damaged and it could not fly back to Pakistan after delivering the consignment of weapon. However, they did not show the drone to the media.
The state police had on Sunday claimed to have busted the terror module of the KZF, which is backed by a group based in Pakistan and Germany.

Taking serious note of Pakistan using Chinese drones to airdrop weapons in Punjab, the Army and BSF on Thursday sounded an all-out alert along the entire Indo-Pak border and the LoC.

On Wednesday, the police had said GPS-fitted drones carried out seven to eight sorties from Pakistan to drop weapons which were seized in Punjab’s Tarn Taran district.

A Punjab police probe also indicated the weapons were to be used to carry out terror attacks in neighbouring Jammu and Kashmir.