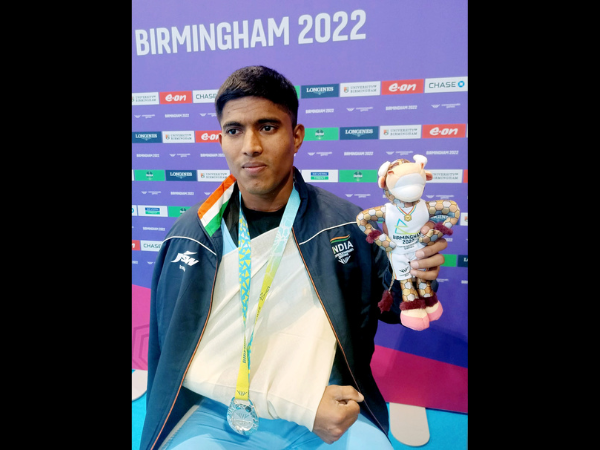 INDIA opened their medal tally at the Commonwealth Games 2022 when Sanket Mahadev Sargar bagged the silver in the men’s 55 kilograms (kg) weightlifting event in Birmingham.

The 21-year-old from Nagpur in the western Indian state of Maharashtra braved an elbow injury to win the second medal with a total of 248 kg to finish behind Malaysia’s Aniq Mohamad, who totalled a kg more. It was a thrilling finish to the final as the Malaysian needed a Commonwealth record of 142 kg in clean and jerk to win the top medal which he did.

Sargar sustained his injury when he tried to lift 139 kg in his second clean and jerk attempt. He then went for a final attempt, braving the injury. He though was not able to lift 139 and finished with the silver. Sri Lanka’s Dilanka Yodage won the bronze with a total of 225 kg.

Sargar, a national champion, was one of the favourites to win a medal for India in weightlifting, a sporting discipline in which India have won medals at the Commonwealth Games over the years.

Indian prime minister Narendra Modi congratulated Sargar in a tweet, saying, “Exceptional effort by Sanket Sargar! His bagging the prestigious Silver is a great start for India at the Commonwealth Games. Congratulations to him and best wishes for all future endeavours.”

Exceptional effort by Sanket Sargar! His bagging the prestigious Silver is a great start for India at the Commonwealth Games. Congratulations to him and best wishes for all future endeavours. pic.twitter.com/Pvjjaj0IGm

Sargar started weightlifting at the age of 13 and has been finishing on the podium at major international contests, including the Commonwealth Weightlifting Championships 2021 in Tashkent, Uzbekistan. His father owns a small tea and food stall in Maharashtra which Sargar helps to run.

Sargar, a student of acclaimed weightlifting coach Vijay Sharma, reached Birmingham a month in advance as the Government of India had arranged a preparatory camp for the weightlifters in the host city to get acclimatized with the conditions.

The man wants to see his father not working as hard as he has been to earn a living. His next goal is to do well at the Paris Olympics in 2024 and go up the ladder as one of India’s best weightlifting talents.