Apple Trade In Kashmir Picks Up 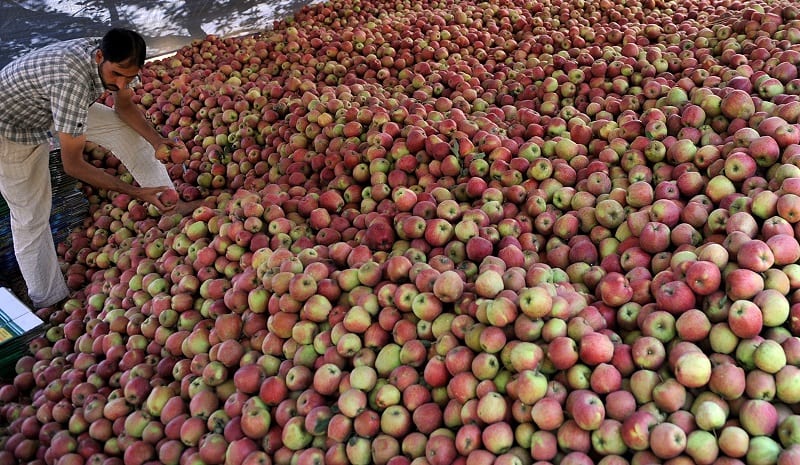 Involving some 3.5 million people, apples are the core of Indian Kashmir’s economy, which went into a tailspin after phone and internet links were suspended and hundreds of people detained to prevent anti-India protests from erupting in the streets (Photo: SAJJAD HUSSAIN/AFP/Getty Images).

MORE THAN 10,000 trucks laden with apples left Kashmir this week in a sign that the territory is returning to normal, according to officials and government data, after India imposed a clampdown on the region in August.

Involving some 3.5 million people, apples are the core of Indian Kashmir’s economy, which went into a tailspin after phone and internet links were suspended and hundreds of people detained to prevent anti-India protests from erupting in the streets.

Thousands of trucks were lined up on the main highway connecting Kashmir, to the rest of India on Thursday (17), signalling a recovery in the trade half-way through the harvest.

Beginning Monday (14), more than 12,000 trucks left Kashmir, bringing the total amount of apples shipped out of the region this year to nearly 0.7 million metric tonnes, compared to one million at this point last year.

“The exports are already picking up,” said Ghulam Mohammad Dar, an official from Kashmir’s horticulture department, adding that he expects the industry to ship out more than last year’s total figure of 2.2 million metric tonnes.

Some mobile connections have been restored and restrictions on movement eased, allowing traders to engage with buyers outside the state.

The internet remains suspended in Kashmir for fear it could be used to stir up protests.

Kashmir’s apple industry initially came to a near-complete standstill as traders and fruit pickers were stuck in their homes because of strict movement curbs and the apples were left unpicked in orchards.

Traders have been undeterred by a slight spike in attacks by militants on people involved in the apple industry. Since Monday, suspected militants have killed a truck driver transporting apples and two traders, all of them non-Kashmiris.

Mohammed Amin, the president of the Fruit Growers’ and Dealers’ Association of Shopian, said freight costs could rise following the attacks.

Some traders are already paying double the normal rate to move their apples and it keeps going up, they said.

“We are sending apple to outside markets but we are suffering huge losses,” said Fayaz Ahmad Malik, who is based in Sopore in northern Kashmir.

Apple growers and traders, though, have shunned a federal government plan to directly buy 1.2 million metric tonnes, saying the prices offered were low.

Since September 16, the government has only bought about 1,600 metric tonnes, shipped out on 70 trucks, according to official data reviewed by Reuters.

An official from the National Agricultural Cooperative Marketing Federation of India, which has been tasked with buying the government’s share of Kashmiri apples, said the agency was unlikely to buy more than half its initial target.