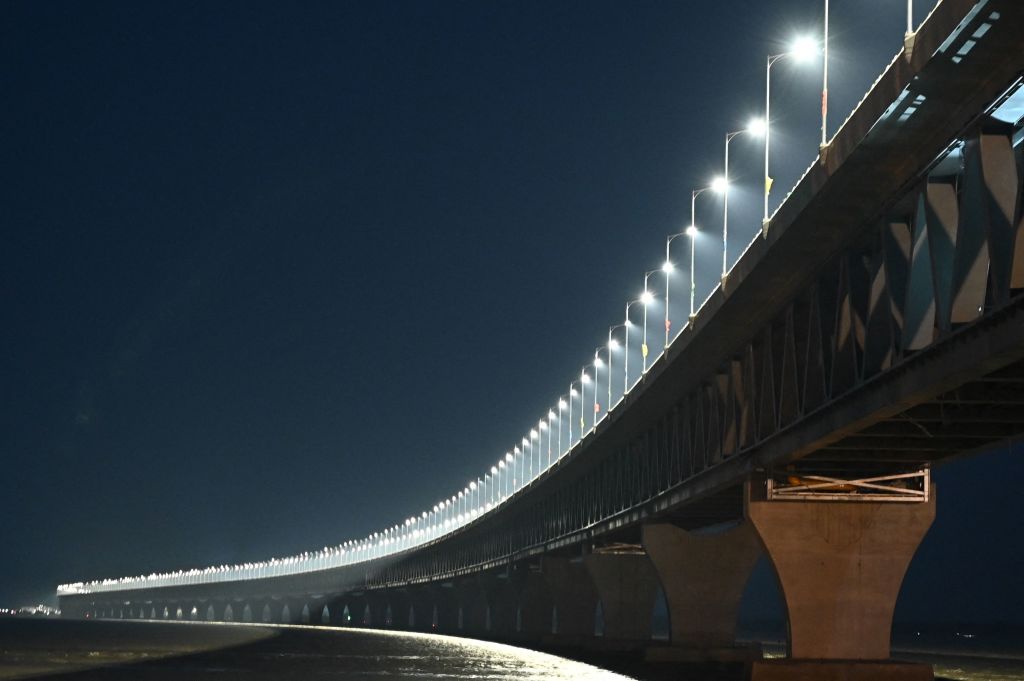 An aerial photograph taken on June 15, 2022, shows a general view of the Padma Multipurpose Bridge and railway project, in Louhajang, some 40 kms from Dhaka, the capital of Bangladesh. (Photo by MUNIR UZ ZAMAN/AFP via Getty Images)

THE Bangladesh police have arrested two men for social media posts deemed critical of a new bridge that had been trumpeted by the government as one of its greatest achievements.

The Padma Multipurpose Bridge was inaugurated on the weekend in a ceremony attended by almost a million people, after a long construction plagued by delays and corruption allegations.

Its opening caps a key infrastructure goal by prime minister Sheikh Hasina, and her government’s fanfare over the project has been matched by a hardline response to any criticism.

One man was arrested on Monday after a Facebook post in which he expressed a desire to take a photograph of himself urinating on the bridge, according to local media reports.

Police confirmed to AFP the arrest of Abul Kalam Azad, a former low-level official of the opposition Bangladesh Nationalist Party (BNP), without clarifying the nature of the 42-year-old’s online remarks.

“He made a bad comment and used bad language about the bridge,” said Sadequr Rahman, the police chief in the coastal district of Companiganj.

There was no immediate comment from Azad, who police said deleted his post after it triggered “widespread reactions” in his coastal town.

His arrest came on the same day police detained a TikTok user who allegedly posted a short video showing that bolts used to fasten the bridge together could be easily unscrewed.

Bayazid Talha was taken into custody in Dhaka on Monday after his post went viral.

A senior police officer told reporters that Talha had made the video to “smear” the reputation of both the bridge and the government.

Neither man has been formally charged with an offence but both were scheduled to appear in court Tuesday to be remanded into custody.

The four-mile bridge, which took nearly eight years to build, ends an economic bottleneck that required freight destined for the country’s underdeveloped south and the Indian megacity of Kolkata to be slowly ferried over the Padma river.

Major roads across Dhaka were festooned with lights, lasers and decorations to mark Saturday’s opening ceremony and thousands of people have visited the bridge each day since.

But the project had a troubled history even before construction began, with the World Bank and other lenders withdrawing finance after graft allegations.

And in 2019, eight people were killed in vigilante lynchings sparked by social media rumours of children being kidnapped and sacrificed as offerings for the bridge’s construction.

Is Bangladesh the next Sri Lanka? Speculation rife after Dhaka hikes fuel prices by 52%

Bizarre: Bangladesh cops haul in tuneless singer, say he is too ugly to sing