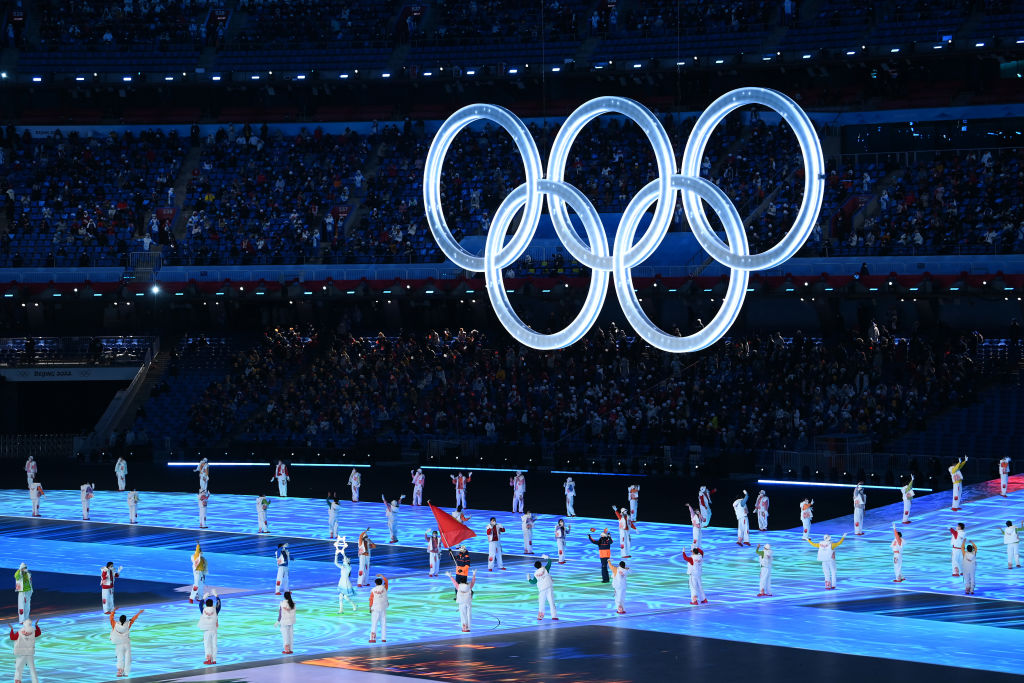 A scene from the opening ceremony of the 2022 Winter Olympics at the Beijing National Stadium in Beijing, China, on February 4, 2022. (Photo by Matthias Hangst/Getty Images)

THE United States has said that it stands with India against China’s intimidating tactics after Beijing deputed a People’s Liberation Army (PLA) official, who was part of the military command that attacked Indian troops in the Galwan Valley in 2020, as a torchbearer for the Winter Olympics that kicked off in the Chinese capital on Friday (4).

On Wednesday (2), China fielded the regiment commander involved in the 2020 clash with the Indian soldiers in eastern Ladakh’s Galwan Valley to carry the Olympic torch in Beijing. India reacted to the incident by announcing a diplomatic boycott of the opening and closing ceremonies of the mega sporting event.

India’s national broadcaster Doordarshan also decided against live-telecasting the twin ceremonies in view of the incident.

Responding to a question on China’s move, US state department spokesperson Ned Price told reporters at his daily news conference on Thursday (3) that Washington has earlier voiced its concern over Beijing’s pattern of ongoing tactics to intimidate its neighbours.

“When it comes to the broader issue of India-China border situation, we continue to support direct dialogue and a peaceful resolution of the border disputes,” Price said.

“We have previously voiced our concerns on Beijing’s pattern of ongoing attempts to intimidate its neighbours. As we always do, we stand with friends. We stand with partners and allies to advance our shared prosperity, security and values in the Indo-Pacific,” he said.

Two top US senators have also slammed China for its decision to field the regimental commander of the PLA as the torchbearer for the Games.

“Another outrageous example of the #CCP’s flagrant politicization of Beijing2022. Their decision to choose a soldier who participated in a 2020 ambush against Indian troops as torchbearer is appalling and deliberately provocative,” Republican senator Marco Rubio said, adding that he stands with India.

In another tweet, Republican senator Jim Risch, a ranking member of the powerful US Senate Foreign Relations Committee, also said the US will continue to support India’s sovereignty.

“It’s shameful that Beijing chose a torchbearer for the Olympics 2022 who’s part of the military command that attacked India in 2020 and is implementing genocide against the Uyghurs. The US will continue to support Uyghur freedoms and the sovereignty of India,” Risch tweeted.

House of Representatives’ Speaker Nancy Pelosi, a Democrat, alleged that it is an attempt of the Chinese government and Chinese Communist Party (CCP) to use the glitz and glamour of the Olympics to showcase a facade that distracts global attention from egregious human rights abuses in China.

“These efforts generate many questions that the Congressional-Executive Commission on China (CECC) explored throughout 2021 regarding the policies of the International Olympic Committee, the nexus between major sporting events and human rights, and the responsibilities of governments, sporting bodies, corporate sponsors, broadcasters, and others affiliated with these Olympic Games,” she said.

Meanwhile, Rubio was on Thursday joined by several other senators from his party, including Rick Scott, Josh Hawley, Mike Braun, Ted Cruz and Bill Hagerty, in introducing the ‘No PLA Loopholes’ Act — a bill to close a loophole in the existing law to limit joint military operations and exercises between the US and the PLA, the armed wing of the CCP.