Beyond Shelter In A Storm, Odisha Eyes Sturdier Homes, Power And Trees 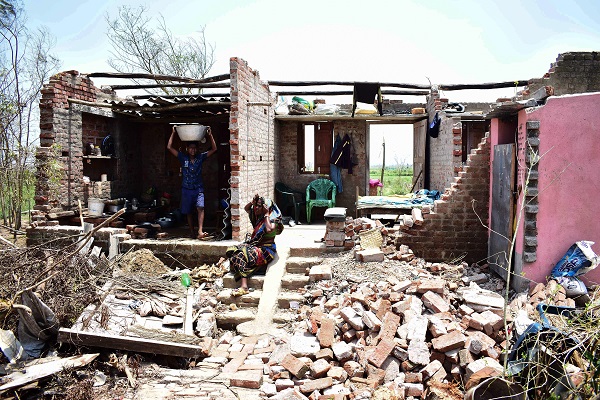 A resident collects belongings from inside a house destroyed by the cyclone ‘Fani’ in Puri in the eastern Indian state of Odisha on May 11, 2019 (Photo: ASIT KUMAR/AFP/Getty Images).

SIX weeks after India’s eastern state of Odisha was battered by the strongest storm since 2013, officials are considering how to build back damaged homes and power networks to better withstand future wild weather, as well as protecting the coast with trees.

When powerful Cyclone Fani swept ashore, the wind yanked a huge banyan tree from the soil and crashed it onto Phula Rout’s corrugated-roof home in Shastri Nagar slum in Bhubaneswar city.

As the tree’s roots began to pop, 30-year-old domestic worker Rout and her family rushed outside their two-room house.

The Routs were lucky, but many of the more than 16 million people in the path of the storm were saved instead by careful disaster planning, which led to an evacuation of 1.1 million to safer shelter ahead of the cyclone striking in early May.

The storm will have cost the state about $1.3 billion, including loss of public property and the cost of recovery, said Bishnupada Sethi, chief of the Odisha State Disaster Management Authority (OSDMA).

Around Odisha, more than half a million homes were damaged, close to 1.5 million trees uprooted, and much of its energy infrastructure was destroyed.

In Shastri Nagar, where about 60 per cent of families lost their homes, the worst-hit were still on the streets more than a week afterwards, struggling without power in harsh heat and humidity.

“We are cooking, eating and sleeping on this sidewalk,” Rout’s rickshaw-driver husband Manoj told.

He paid wood-cutters a week’s wages to chip at the banyan tree until it could be rolled off the roof. Clearing Bhubaneswar of fallen trees and vegetation took well over a fortnight.

After the storms, hundreds of government workers were deployed to map out damaged homes in poor areas, many of them roofed with thatch, tin or corrugated cement sheets.

Nearly all the households identified have received more than Rs 2,500 ($36) to buy plastic sheeting for roofs, and 50 kg (110 lb) of rice to feed them in the short term.

Chief minister Patnaik said in mid-May that there was “a dire need” to build disaster-resilient housing along Odisha’s coastal belt, which is vulnerable to cyclones, having experienced four major storms in the last six years.

He requested the central government to provide funding for 500,000 affordable homes for the poor in rural and urban areas under the “Housing for All” scheme.

Another plan to increase coastal resilience is to put in “massive coastal plantations”, especially in areas denuded by Fani, once the monsoon starts in July, Odisha Forest and Environment Minister Bikram Keshari Arukha told journalists.

Meanwhile, 18,000 trees not fully uprooted by the storm were nursed back to health and sprouting new leaves, he noted in early June.

“We are determined to green back the state better,” he said.

Indigenous species that are hardier against strong winds are being planted on roadsides and in parks and sanctuaries.

Preparations for storms like Cyclone Fani began years ago, with the OSDMA training hundreds of community volunteers as first responders. Their ranks have grown to tens of thousands.

That effort paid off, with deaths kept to about 64, compared to 1999 when 10,000 people lost their lives in a super-cyclone.

Ambulances ferried about 2,000 from remote areas to health facilities so they could access care during the storm.

Elsewhere, the state government set in motion a broader plan to evacuate more than 1 million people.

For the first time, it ordered schools, colleges, offices, markets and shops to close as the storm approached.

Operations in two major ports were suspended and berthing ships ordered to move out to sea to avoid damage.

Indian Railways cancelled or diverted some 200 trains along Odisha’s coastal tracks, while commercial flights at Bhubaneswar airport were stopped, and much road transport was prohibited.

In Puri, a religious and beach tourism hub, police went into every seaside hotel to evacuate 25,000 visitors who were moved by train to Kolkata in neighbouring West Bengal State.

Pre-prepared kitchens were set up to feed evacuated families rice and lentils.

In rural communities and urban slums, authorities and volunteers used phone text messages, radio and megaphones to urge families to flee to shelters.

Volunteer Ramachandra Maharana, 26, said that in his home village near Gopalpur port, everything – from three-wheeler rickshaws to goods-carrying mini trucks – was commandeered to move children, older and other vulnerable people to safety.

As formal shelters filled, families were diverted to the next-sturdiest structures, from schools to brick homes nearby.

“This is the result of Odisha changing to a proactive approach towards natural calamities from what was a reactive attitude during the 1999 super-cyclone,” said Arun Bothra, Odisha police inspector-general.

But over a month on, power blackouts continued in several rural areas and electricity was restored in some cities and towns only a week ago.

Some districts will have to set up their entire electricity networks afresh, the Odisha chief minister noted.

The state is now looking at how to better disaster-proof its energy infrastructure, turning to the United Nations, the Asian Development Bank and the World Bank to include such work in other clean energy programmes already underway.

Patnaik has also proposed that the United Nations set up an international centre in Odisha for disaster mitigation and recovery.