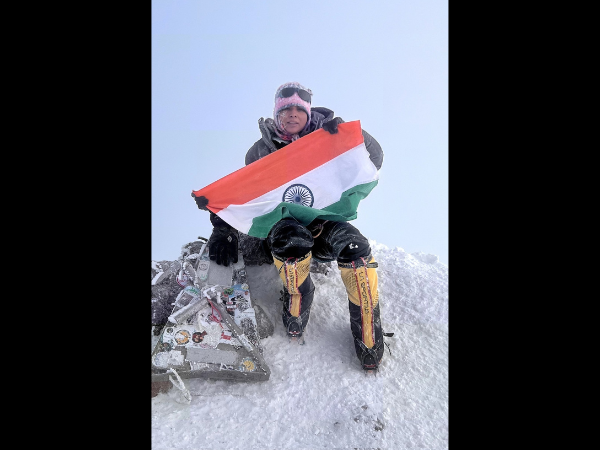 Indian mountaineer Bhawna Dehariya (15) on Monday unfurled the Tricolour on Mount Elbrus, the highest peak in Europe, to mark India’s 76th Independence Day. Dehariya, 30, who hails from the hamlet of Tamia in the Chhindwara district of the central Indian state of Madhya Pradesh, timed her expedition to hit the peak just in time to celebrate ‘Azadi Ka Amrit Mahotsav’ with the Tricolour.

As someone who has conquered Mount Everest in the past, the mountaineer decided to take on the challenge of scaling the 5,642-metre peak in Europe located on the Russia-Georgia border.

A very happy Independence Day to everyone. It is pride to share that I celebrated this auspicious day at the highest peak of Europe on Mount Elbrus, ascending to a height of 5642m (18510 ft) above sea level. Unfurling our national flag at the peak added grandeur to this summit. pic.twitter.com/vDEImdZ7VK

“The weather near the top of the mountain was extremely cold, with winds blowing up to 35 km/h and making visibility subsided with temperatures down to minus 25 degrees Celsius,” said Dehariya, in a message from the peak.

“It made it difficult for us even to take a rest for few minutes amid the coldest weather. However, post-pregnancy, I was mentally prepared for the summit. I geared myself up for this day and practiced a lot in the mountains of Tamia. Thus, this made me successfully reach the top of Mount Elbrus before record time,” Dehariya, mother of a 15-month-old daughter, said.

Sharing the experiences from her expedition with a team of mountaineers, Bhawna Dehariya recalled how on August 10 they travelled from the Russian capital of Moscow to Mineralny Vody, from where they began their proposed climb to Mount Elbrus.

“The next day was extremely strenuous due to bad weather and I had a blood clot from my nose while undergoing high altitude acclimatisation during the rotation for climatic adaptation at a height of 2,346 metres,” shared Dehariya.

“Thereafter, we established a base camp with the group on August 12 at a height of 3,888 metres, where we had rotation for the following two days up to a height of 4,500 metres. Notably, this rotation is considered to be essential for protecting the body from acute mountain sickness and fluctuations in mountain air pressure,” she said.

It was at midnight on Saturday (13) that the team set off for the peak and arrived in the early hours of August 15. “I hoisted the Tricolour with grandeur at the peak of Mount Elbrus West, which is 5,642 metres high above the sea level,” said the proud mountaineer.

Dehariya admits this expedition, collaborated by the Madhya Pradesh Tourism Board and the State Bank of India, has been one of the most difficult, strenuous and physically exhausting.

She has previously established herself as one of the first women from Madhya Pradesh to scale the summit of Mount Everest on May 22, 2019, and went on to scale Mount Kosciuszko in Australia in the same year. She has also scaled Africa’s Mount Kilimanjaro, the continent’s highest peak and has had the opportunity to celebrate Diwali and Holi at some of the highest peaks.

Her latest expedition was planned for ‘Azadi Ka Amrit Mahotsav’ and was made particularly tough as she had to leave behind her daughter. However, the mountaineer is determined to complete peaks of all seven continents as part of her “Seven Summits Quest” and unfurl the Tricolour on all of the highest peaks she scales.

Madhya Pradesh chief minister Shivraj Singh Chouhan praised Dehariya over her feat and wisher her on her quest to unfurl the Indian National Flag on the highest peak of all seven continents.

I wish her the best on her quest to unfurl the tiranga on the highest peaks of all seven continents. pic.twitter.com/KhpAlLkygp

After US, it’s Europe: Man, believed to be Indian, racially abused by American tourist in…

Get the facts right: Russian embassy slams UK govt over mine ‘detection’ near Ukraine ports

Ready to send humanitarian aid to Ukraine on Kyiv’s special request: India to…

Russia hopes to have India, Pakistan in SCO convention on extremism combat

Was planning terror attack in India over Prophet insult: IS man detained in…