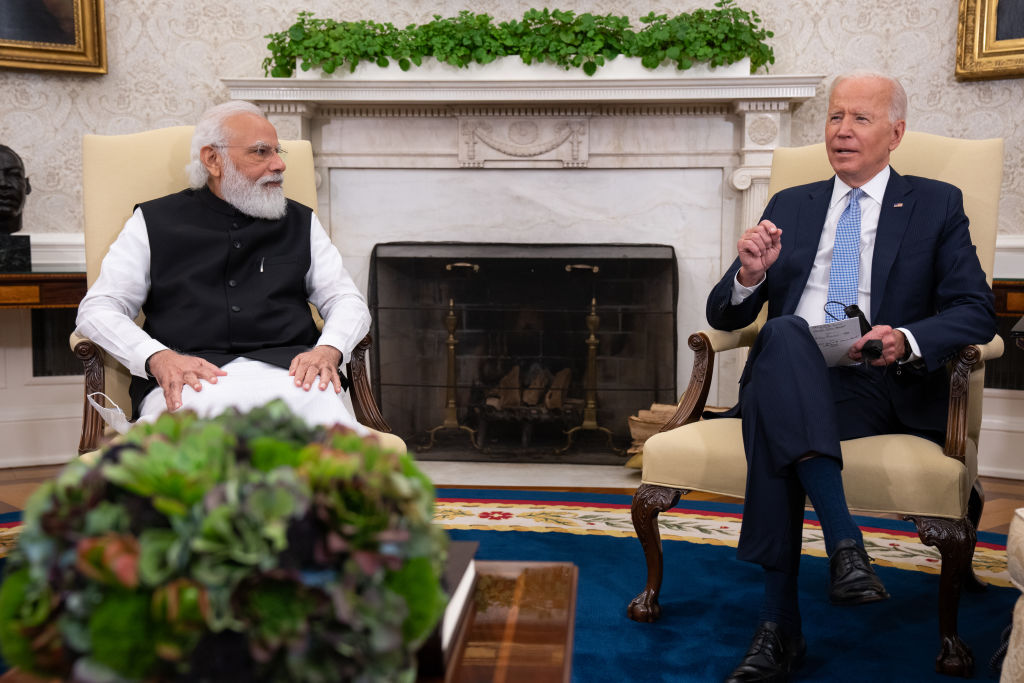 Indian prime minister Narendra Modi with US president Joe Biden at the White House, Washington DC, the US, on September 24, 2021. (Photo by Sarahbeth Maney-Pool/Getty Images)

INDIA on Friday (24) said US president Joe Biden and other leaders agreed to keep a careful watch on Pakistan saying Islamabad has been an “instigator” of trouble in Afghanistan where the Taliban have recently stormed back to power.

Pakistan’s role in the Taliban-controlled Afghanistan has come under the scanner, particularly after it has given enough hints at backing the extremist regime in Kabul. Pakistani prime minister Imran Khan has been slammed over his remarks that the Taliban broke the shackles of slavery after their return to power.

New Delhi has also expressed concerns that with the Taliban returning to power in Afghanistan, the country’s soil could be used by anti-India terror outfits based in Pakistan against India’s interests.

The discussion about Pakistan came up during the first in-person summit of the Quad at the White House in Washington DC. Besides Biden, Indian prime minister Narendra Modi and his Australian and Japanese counterparts – Scott Morrison and Yoshihide Suga – respectively, were also present.

Modi expressed concerns about extremist elements in Afghanistan after the Taliban’s return to power in August, Indian officials said, according to AFP.

The Quad will keep track of the “important point which sometimes gets overlooked when you see Pakistan projecting itself as a facilitator whereas it has really been in many senses an instigator of some of the problems in our neighborhood and beyond,” he said.

While India backed the pro-western government in Afghanistan that ruled the country for two decades before the Taliban returned in mid-August after the US-led troops started withdrawing, Pakistan supported the Taliban when they were in power between 1996 and 2001 when the US invasion toppled the regime.

Islamabad found itself under pressure thereafter as its old ally US asked it to take a strong stand on terrorists following the 9/11 attacks but Washington also accused Pakistan’s powerful intelligence services of maintaining support for the Taliban, partly due to its concerns over India’s influence in Afghanistan.

While Pakistan recently expressed disappointment after US secretary of state Antony Blinken said that Washington would assess Islamabad’s role in the last 20 years, Blinken was on Thursday (23) seen on the sidelines of the UN General Assembly thanking Pakistan for helping American citizens exit Afghanistan. Blinken’s Pakistani counterpart Shah Mahmood Qureshi pledged to work to fulfil their “common objective”.