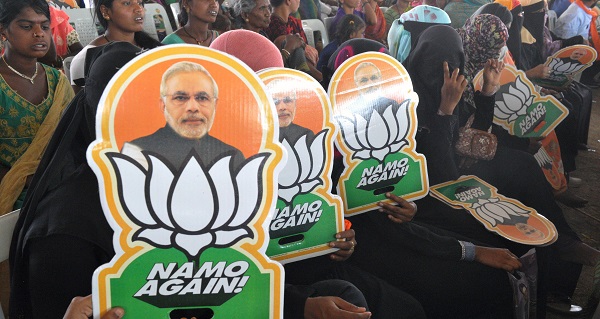 In an interview, he slammed “so-called mainstream political parties” like the PDP and the NC in Jammu and Kashmir for their doublespeak on the situation in Kashmir (Photo: NOAH SEELAM/AFP/Getty Images).

BHARATIYA JANATA PARY (BJP) leader, Indian minister Jitendra Singh on today (6) said the BJP is ready to hold assembly elections in Jammu and Kashmir but a final decision on the matter needs to be taken by the Election Commission after considering security-related concerns.

In an interview, he slammed “so-called mainstream political parties” like the PDP and the NC in Jammu and Kashmir for their doublespeak on the situation in Kashmir.

He also cited the Balakot air strike to compliment the Modi government for showing consistency and firmness in dealing with terrorist acts.

On the issue of “Hindu terror”, Singh, who is also minister of state in the prime minister’s office, said the Congress and its allies are guilty of giving a religious colour to terrorism and asserted that there is no “good or bad terrorism”.

“… Let me put it on record. The BJP has been saying terrorism is terrorism and it has no religion and colour.

“No distinction should be made in good or bad terror. The Hindu terror phrase or term was coined by them (opposition parties, including Congress). Therefore, it is the Congress party and its allies who are guilty of giving religious colour to terrorism by saying so,” Singh said.

The BJP leader said the BJP’s candidate Pragya Singh Thakur, who is accused in the Malegaon blasts case, will win the Bhopal parliamentary seat against Congress’ Digvijay Singh hands down.

Terming the Aam Aadmi Party’s promise of ensuring full statehood for Delhi if it is voted to power an “untruth”, he said the Arvind Kejriwal-led party has never acted on its words.

“The BJP will consider all issues (including statehood) related to the national capital in a very judicious manner,” the minister said.

Discussing Jammu and Kashmir, the MP from Udhampur said the BJP is always ready for any election, be it panchayat, local body, assembly or parliamentary.

“As far as the timing of the assembly elections is concerned, the decision and discretion of that is absolute with the Election Commission of India. The allegations by certain political parties of the BJP delaying the election are completely baseless,” the minister said.

He said it is for the Election Commission to gather required inputs based on security  factors and then take a call on the dates.

“As far as the BJP is concerned, we are ready for the polls any time, whether it is today or a few months later,” the minister said.

Jammu and Kashmir has not had an elected government since the PDP-BJP coalition government fell apart in June 2018.

The state was placed under Governor’s Rule on June 19, 2018, after the BJP withdrew from its coalition with the PDP.

As mandated by the Constitution, the state was brought under President’s rule on December 19, 2018. President’s rule has been extended for a period of six months till May 19, 2019, or till an elected government is put in place, whichever is earlier.

To a question on abrogation of Article 370, which gives special status to Jammu and Kashmir, he quoted statements made by BJP president Amit Shah and said,

“Abrogation of Article 370 continues to be part of BJP’s agenda.  Once we get sufficient majority in both the houses of the Parliament we will go ahead with it.”